Wie edges out Shin in LPGA Canada round

Wie edges out Shin in LPGA Canada round 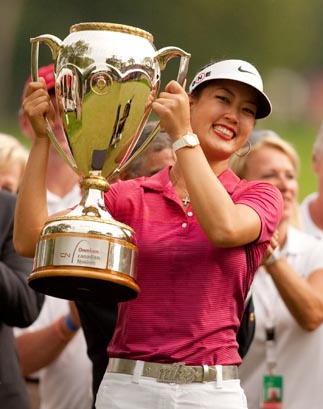 WINNIPEG, Canada - Korean-American Michelle Wie won her second career title by going down to the wire to capture the LPGA Canadian Women’s Open on Sunday. She fired a two-under 70 to reach 12 under par after four rounds at the St. Charles Country Club for a three-stroke win over Shin Ji-yai, Suzann Pettersen, Lee Young-jee and Kristy McPherson.

“I made a lot of crucial putts today,” said Wie, who won her first-career stroke-play tournament at the LPGA Mexico event in November.

Korea’s Shin shot a one-over 73 and tied for second with American McPherson (66), defending champion Pettersen of Norway (69) and Young from Korea (69).

Heading into the final round, the 20-year-old Wie and Shin were tied for the lead. Shin played with Wie in the final pairing but stumbled down the stretch.

“My shot was really good, but my putting was so bad,” Shin said. “I [had] lots of chances for birdies, but I couldn’t make it just a couple times.”

That left Wie to collect the $337,500 purse for winning the LPGA’s only event in Canada. It has been a career of extreme highs and lows for Wie, who at 10 years old was the youngest player to qualify for the U.S. Amateur Championship. She once held aspirations of playing full-time on the men’s tour but a string of mediocre performances on the LPGA Tour ended that plan.

“I just feel like I haven’t been playing as well as I wanted to the last couple of months, and [this] just really makes me more motivated for the rest of the season,” said Wie.

Wie tallied five birdies and three bogeys on the St. Charles course and finished 12-under 276.

She had three birdies in a row at one point, capped by a chip-in on the 15th hole. Wie, who is projected to move to number seven in the world rankings, is also scheduled to return to university in California in a couple of weeks.

Wie played through a sore back Sunday, clutching her lower back several times during the third round. She messaged on her social networking page before the final round that she was suffering from back pain.

To celebrate her win, Wie was given a champagne shower by fellow Korean-American Christina Kim. “I was trying to run away from her,” Wie said. “All I was thinking was ‘I’m wearing white pants, please be nice.’”