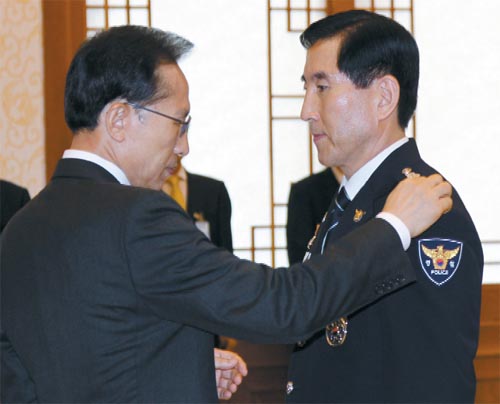 But President Lee Myung-bak will not hurry to name replacements for the minister of culture, sports and tourism and minister of knowledge economy, who both walked away from the jobs Sunday after their ethics were questioned by lawmakers in confirmation hearings. Prime minister designate Kim Tae-ho quit for the same reason.

“I have accepted the decisions of the prime minister-designate and the minister-nominees because the Blue House must become the starting point to make Korea a fair society,” Lee said at the Blue House senior secretariat meeting to his spokeswoman Kim Hee-jung.

“The incumbent ministers of the culture and knowledge economy are currently performing their duties, so I will not hurry to make the appointments,” Lee said.

In the aftermath of a crushing defeat in local elections in June, Lee performed a major reshuffle of both his cabinet and aides at the Blue House to restore the administration’s popularity. But the Aug. 8 shakeup ended up in debacle as three of Lee’s nominees gave up their appointments on Sunday.

Kim Tae-ho, Shin Jae-min (culture minister-nominee) and Lee Jae-hoon, (knowledge economy minister-designate), all bowed out after confirmation hearings at the National Assembly disclosed illegalities and other skeletons in their closets.

Lee, however, said he has no intention of leaving the prime minister post vacant for a long time.

“I am looking for someone who fits the standards and is capable of leading the cabinet,” Lee was quoted as saying.

Yesterday afternoon, Lee formally appointed five new ministers in a ceremony at the Blue House. New heads of the National Police Agency and the National Tax Service also received their letters of assignments, despite the opposition Democratic Party’s demand that the police chief must give up his post.

In the same lecture, Cho insulted the families of sailors who were killed in the sinking of the warship Cheonan in March. Cho met with the families and apologized to them.

“I believe the people who thought they were not good enough to meet the standards of a fair society have stepped down voluntarily, and the president accepted their decisions,” said the presidential spokeswoman. “The rest of the appointees, I believe, will play an important role in making a fair society.”

The Democrats apparently disagreed. The DP’s deputy spokesman, Kim Hyun, warned that Lee’s decision to keep Cho will become a “boomerang that Lee won’t be able to handle.”

After the three cabinet nominees quit, the Blue House said it is working to improve its screening system for nominees to top government positions, Kim said. The civil affairs office at the Blue House will come up with basic screening standards.