Foreign visitors to be fingerprinted

Foreign visitors to be fingerprinted 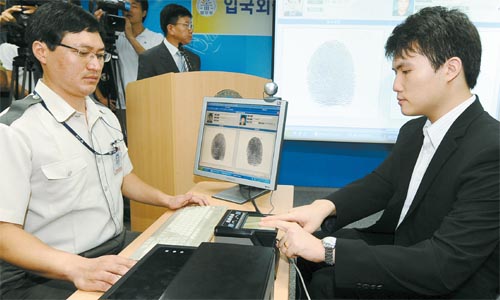 Officials of the Korean Immigration Service demonstrate the new system to register fingerprints and pictures at Incheon International Airport yesterday. The system is being implemented before the G-20 summit in November in order to catch foreign criminals or people traveling on fake passports. Biometric inspections will begin Sept. 1 [NEWSIS]

Suspicious foreigners trying to enter Korea will be forced to give their fingerprints and have their photos taken in immigration lanes at airports and ports starting Sept. 1, the Ministry of the Justice announced yesterday.

In December 2011, all foreigners will have to comply.

The Korean Immigration Service has installed 134 inspecting machines in 22 airports and harbors to screen biometric data of foreign visitors. The system can track visitors’ criminal records.

“The new system has three steps, so we need more time to apply it to all foreigners,” said the ministry.

According to the immigration office, the first screening will be for foreigners who are suspected of traveling on fake passports, who have suspicious itineraries or whose personal records are similar to those of terrorists.

Next June, the inspections will be expanded to expatriates who have lived in Korea more than 90 days.

“The registration will be mandatory for all foreigners visiting Korea from December 2011, when all the systems and facilities are built,” said the government official.

According to the Justice Ministry, the number of people caught with fake passports reached 1,502 since January. Most of the fake passports were from Southeast Asian countries.

The ministry said the system will boost security for the G-20 Summit this November.