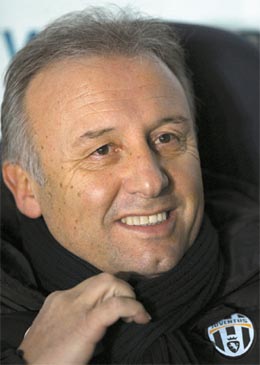 The Korean and Japanese national football teams are headed down a similar path as they prepare for the 2011 Asian Cup and the 2014 World Cup under new managers.

Both squads will likely employ three-back defense systems. The last time the two rivals used a three-back system was eight to nine years ago, when Dutchman Guus Hiddink was the manager of the Korean national team and Frenchman Philippe Troussier was managing the Japanese team.

Having managed several of the top clubs in the Italian Series A, Zaccheroni is known to employ a system featuring three-backs, four midfielders and three forwards.

Since taking on his first managerial post with Cesenatico in 1983, Zaccheroni won his first Series A league title with AC Milan in the 1998-99 season.

However, Zaccheroni has not been as successful since then. It’s due to his insistence on using his trademark 3-4-3 formation.

Under heavy pressure from AC Milan’s president Silvio Berlusconi, Zaccheroni compromised and made a switch to a 3-4-1-2 formation. He went on to manage teams such as Lazio, Inter Milan and Juventus but has produced mediocre records.

At the 2010 South Africa World Cup, fullbacks played an important role in contributing to Japan’s attack. Left fullback Yuichi Komano of Jubilo Iwata and right fullback Yuto Nagatomo of Cesena did an admirable job of sparking their team’s offense from the defensive line. They can improve with a switch to a three-back system.

During Zaccheroni’s tenure with Udinese, between the 1995-98 seasons, the heart of the club was forward Oliver Bierhoff and right fullback Thomas Helveg. Bierhoff led the league in scoring that season, and Helveg provided active play up the right wing to create chances for his teammates. The two players would follow Zaccheroni to AC Milan in 1998.

Korean manager Cho Kwang-rae is also busy evaluating players with a three-back system in mind. In the Aug. 11 international friendly against Nigeria, Cho went with a 3-4-2-1 formation. Cho’s system requires the central defender to move up to support the midfield when wingers contribute on offense. It’s a change from Huh Jung-moo’s strategic formation, which featured four backs with the two fullbacks supporting the attack up the wing. Much like Zaccheroni’s strategic formation, Cho’s tactics are also considered a tweaked version of an outdated formula in today’s leading professional leagues.

It’s unclear at this point, but for both teams who reached the Round of 16 for the first time on foreign soil at the 2010 World Cup, a successful transition under a capable manager is imperative. The first test between the two rivals will take place on Oct. 12 in Seoul.