Going ‘inside’ Paul Smith to see his art, his world

Going ‘inside’ Paul Smith to see his art, his world


On display on the second floor of the Daelim Contemporary Art Museum is a stencil, “Gangsta Rat,” depicting a cute rat in the garb of a hip-hop musician by the young British graffiti artist Banksy. Nearby is the famous “Liz Taylor” silk screen by the American pop artist Andy Warhol. In the hall are many other paintings and photos by artists ranging from the well-known British painter David Hockney to young and less-known painters.

The works look too diverse for an exhibition but have one thing in common. All are part of British fashion designer Paul Smith’s personal collection. “Inside Paul Smith: His art, His photography, His world” opens to the public tomorrow at the museum near the west wall of Gyeongbok Palace in central Seoul.

“The collection is really hard to define because actually it’s a collection which is very diverse, and as I’ve said, I like to collect things very impulsively,” Paul Smith said in his video message for the exhibition. He said he has been gathering art since he was a teenager when he started collecting posters.

The colors of the exhibition resemble the ones used in Smith’s iconic multicolor stripe. Viewers may be able to notice how the artworks have inspired Smith, or they can just have fun at the exhibition. 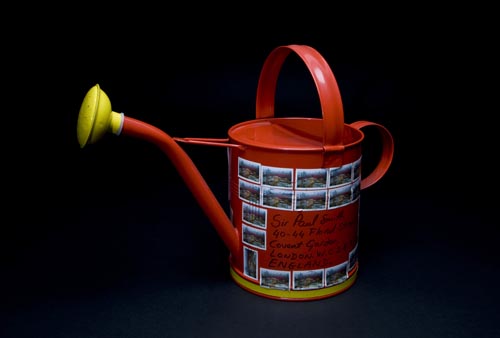 
On the third floor, visitors will encounter something much more eclectic but fun. In one room, objects such as a red watering can, a surfboard and a pair of plastic squids, which look cheap and grotesque, are surrounded with glass walls on white pedestals. They are items Smith has received from an unknown fan for the last 15 years. According to Smith, they arrive through the post but never in a box - with the address and stamps directly on them.

“It seems to me to be more artistic than a lot of so-called art, which is revered around the world,” Smith said in his message.

On the walls of another room are 320 photographs, most of which are snapshots that were taken by Smith. He says he takes photos every day “almost like a visual diary.”

Smith will meet with viewers on Oct. 18. The first 200 applicants from tomorrow through daelimedu2009@hanmail.net will be invited.