The tedious game of Truth or Lie

The tedious game of Truth or Lie 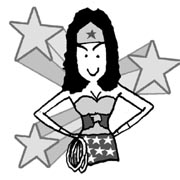 People once used rice for something other than cooking. For example, ancient Hindus used it to find out whether someone was lying or not. They would ask a person to put some rice in his mouth. If the person spit it out he was telling the truth, but if not he was lying. When one tells a lie, they feel uneasy, and his or her mouth gets dry. Thus, the grains of rice stick to the gums and it is difficult to spit them out.

The modern-version of the lie detector was invented in the 1920s by American psychologist William Moulton Marston. Based on the idea that blood pressure goes up when one lies, the device he invented used blood pressure to determine whether a person was lying. It was the precursor to the modern polygraph, which measures physiological responses such as blood pressure, pulse, breathing and skin conductivity.

Marston was also a comic book writer who made his debut in the 1940s. The character he created was Wonder Woman. Wonder Woman was the first female superhero in the comic book world, which until then had been a playground for male heroes such as Batman and Superman. One of the sources of Wonder Woman’s power is the Lasso of Truth, which compels those encircled by it to tell the truth.

Unfortunately, it is widely accepted that polygraphs, unlike the Lasso of Truth, make many mistakes. Pathological liars deceive lie detectors easily, because they do not experience any physiological changes even if they lie. As Mark Twain said, it only works on people who don’t know how to lie. Moreover, if a person deceives himself, it gets even more difficult to distinguish the truth from a lie. It is human nature for one to believe in what one wishes to be the truth.

One’s memory also often succumbs to one’s wishes. The reason why politicians tell lies so often is because of their desire to be somebody they cannot be, according to Bella DePaulo, a psychologist at the University of California. I wonder whether Kim Tae-ho, who was designated as prime minister, felt he had to give up his nomination because his strong wish to be the prime minister was entangled with his memory. But in the end, the truth was revealed through physical evidence that was more convincing than any polygraph.

In addition to the confirmation hearings at the National Assembly, the game of Truth or Lie is tediously being played out everywhere. One good example is the case of Kim Yu-na, the Olympic figure skating gold medalist, and her Canadian coach Brian Orser - over the cause of their split - and the one involving the Korean Alpine Federation and professional mountaineer Oh En-sun - over whether she really reached the peak of Kanchenjunga (8,586m) in the Himalayas.

Either of the two may be lying, but it is difficult for bystanders to decide which side is wrong. As we cannot hold hearings to find the truth, I wonder whether Wonder Woman would appear to give us an answer.