[In-depth interview] Looking back without regrets

[In-depth interview] Looking back without regrets 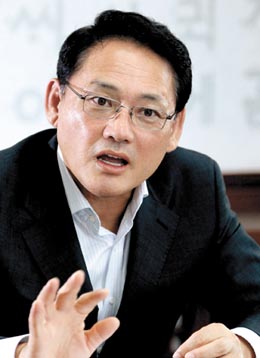 Minister of Culture, Sports and Tourism Yu In-chon has faced many controversies during his time at the post. The actor-turned-politician, whose term was expected to leave soon, set the record for the longest serving culture minister after being in office for two and a half years.

Public criticism regarding Yu started early on, right after his inauguration in February 2008. His blunt remarks, including saying that political figures from the former administration should voluntarily resign, angered many people.

His dismissal of two important cultural figures - Kim Jung-hun as head of the Arts Council Korea, and Kim Yun-su as director of the National Museum of Contemporary Arts, fueled the friction between him and the public. Many viewed these dismissals as Yu’s direct attempt to remove figures who had been appointed by the previous government.

Last month, Shin Jae-min was selected to replace Yu, but he decided to give up his nomination after he admitted during his confirmation that he registered his residency at a different address from where he actually lived - an illegal action in South Korea. As a result, Yu still has the job.

The JoongAng Ilbo caught up with Yu for a one-on-one interview last month at his office in Seoul before Shin gave up nomination.

Q. Your term was the longest ever for a culture minister. What are your thoughts on that?

A. When I look back on my term as minister, I don’t feel that it was a long time. Even though I wish that I had time to see through all the projects I started, I want to tell you that I spent my time at the post actively, without looking back. Although I might not have produced the best results, I did the job to the best of my ability.

If you had to pick the things you are most proud of achieving during your term, what would they be?

They would be finalizing the decision to launch the Seoul branch of the National Museum of Contemporary Art, Korea, launching the National Dance Company and pursuing the launch of a Hangul (Korean alphabet) museum. Although these achievements might not be highly visible for the public, I was attracted more to accomplishing these things that might not be easily recognized. I believe I have laid down the foundation for national arts organizations to be the best they can be and have also led a strict copyright protection policy.

These achievements sound more in the realm of cultural policies rather than something that the public can acknowledge as actual change for them.

If you view it that way, I’d be quite saddened. Next month, the Korea National Ballet is going to Ulleung island to perform. This isn’t just a one-time event. The ministry has systemized schedules for these kinds of nationwide performances by national arts groups. We even started a nationwide dispatch program for librarians to work at libraries in rural areas as well as turning traditional markets into multipurpose cultural spaces.

Even so, the public perception for Yu In-chon, the minister, is worse compared to when you were an actor.

I was really hurt when people started calling me “Yu In-chon wearing an armband” (The expression refers to Yu enforcing his power in a high position as a sort of dictator). Oh well. I guess it is because I am lacking.

Maybe one complaint stems from the fact that you were a celebrity before you became minister. Did you ever feel like you were at a disadvantage when becoming culture minister because of your particular career?

I felt a burden. However, the burdensome feeling also made me work harder in a way and gave me more focus. In the past, my public image was closer to a friendly next-door ajeossi [middle-aged man] but I feel that being in a political post has fueled more controversy my way.

What kind of controversy for example?

Whenever I tried to change a policy, people who had benefitted from it, fiercely opposed, calling my methods political oppression. This was true regarding the operation of the art house theaters - the Korean Association of Cinematheques - under the Korean Film Council.

From the outside, it might look as though Yu’s image veers toward the negative side, but among civil servants in the culture ministry, assessments concerning Yu are generally positive.

“In truth, many senior officials find it bothersome to go out into the field,” said a division head at the culture ministry. “But the minister always went out, every weekend, even to remote areas. We all have great respect for Minister Yu’s passion, diligence and physical strength.”

The interview wouldn’t be complete without a question concerning the dismissal of the heads of key national arts organizations.

You must be referring to Kim Jung-hun, the former head of the Arts Council Korea, and Kim Yun-su, the former director of the National Museum of Contemporary Arts. I it’s very politically driven think when the media mentions these two consistently because 10 or so heads of organizations under the culture ministry who were appointed during the former presidential administration finished their terms. I dismissed them not as a part of my political agenda but for reasons related to their actual duties.

But you lost the first court ruling regarding their dismissal.

That was because the court found that there were problems with the procedural aspects of their dismissal. The final rulings are still to come.

What are your plans after your term ends?

I have heard many unfounded rumors about that, including comments that I am after the head of the organizing committee for the Pusan International Film Festival or the head of Chung-Ang University. These rumors are false. To be honest, I would just rather go volunteer at a performance hall or go work as an arts teacher at a rural school but I think the public will think that I’m putting on a show if I do that. I would like to resume my acting career but if I start soon after my term ends as minister, it might also upset the public.