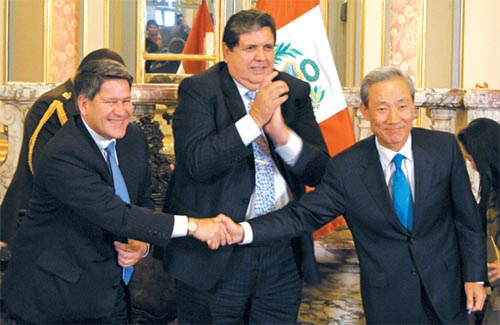 (From left) Martin Perez, Peru’s Minister of Foreign Trade and Tourism; Alan Garcia, President of Peru; and Kim Jong-hoon, Korea’s Minister for Trade, greet each other after a joint statement on the conclusion of free trade agreement negotiations at the Presidential Palace in Lima, Peru, yesterday. Provided by the Ministry of Foreign Affairs and Trade


Korea and Peru agreed to a free trade agreement yesterday in Lima, widening access to the South American market for local companies.

According to the Ministry of Foreign Affairs and Trade, the two countries met for a fifth round of FTA negotiations on Aug. 29 and 30 and were able to close the deal, leading to a joint statement yesterday. Peru becomes the second country in South America to finalize an FTA deal with Korea, after Chile in 2003.

In a joint statement by Korea’s Minister for Trade Kim Jong-hoon and Peru’s Minister of Foreign Trade and Tourism Martin Perez, the two countries said the agreement is “mutually beneficial.”

Tariffs will be eliminated for many Korean products including automobiles, electronics, coffee, asparagus and bananas. But many agriculture and fishery products were excluded from the agreement to protect local industries on both sides. Automobiles currently have a 9 percent tariff in Peru. Large vehicles (with more than 3,000-cubic-centimeter engine displacement) will have tariffs eliminated immediately after ratification, while midsize vehicles (between 1,500 and 3,000 cubic centimeters) will be free of tax within five years. All vehicles will be tariff-free in 10 years. 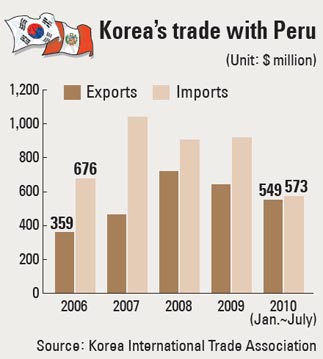 A 9 percent tariff on color televisions will be eliminated, while washing machines and refrigerators, currently taxed at 17 percent, will have tariffs removed in four and 10 years, respectively.

More than 100 agriculture and fishery products - such as rice, beef, onions, garlic, pollack and ginseng - were excluded from the agreement. Cuttlefish imports to Korea, currently under tariffs between 10 and 22 percent, will be tariff-free within 10 years for frozen, seasoned and precooked cuttlefish, while other types will be untaxed in five to seven years.

The agreement has safeguards on imports that may harm each country’s local industries, meaning that trade can be restrained in the future.

For service and investments, Korea will open up its industries in ways similar to the Korea-European Union FTA, while Peru will open up its electricity, gas, broadcasting and communications sectors. 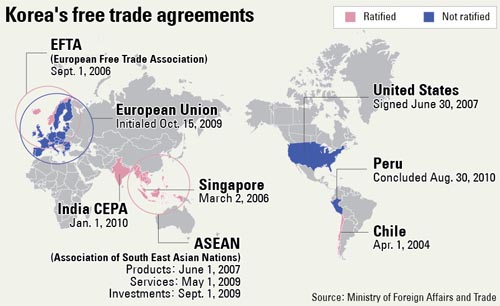 Experts also pointed out that Peru’s mineral resources offer great opportunities for Korea. According to the Ministry of Knowledge Economy, Peru is one of the top three countries in the world for copper, zinc and tin reserves, and it also has crude oil and natural gas. More than 80 percent of Korea’s imports from Peru are mineral resources. Companies such as SK Energy, Daewoo International, Korea National Oil Corporation and Korea Resources Corporation are participating in projects in Peru. The FTA is expected to entice more companies to join them.

“It will be beneficial for Korea to consistently invest in Peru’s energy and resource sectors,” Kim said. “Through cooperation in services and science, Peru has the intention of strengthening its relationship with Korea, and I hope our companies utilize the agreement to their fullest advantage.”

The business world welcomed the deal. The Federation of Korean Industries said that the FTA with Peru will allow Korea to increase its competitive power in Central and South America.

“Countries in Central and South America utilize each country’s strengths well, and the positive effects of the deal are great,” said an FKI representative. “With the Peru deal, if we can widen our FTA deals with other small to midsize countries in Central and South America and the Middle East, we will achieve great results from an increase in exports and securing energy sources.”

The two countries said that after going through a legal evaluation, the agreement will be initialized in November.