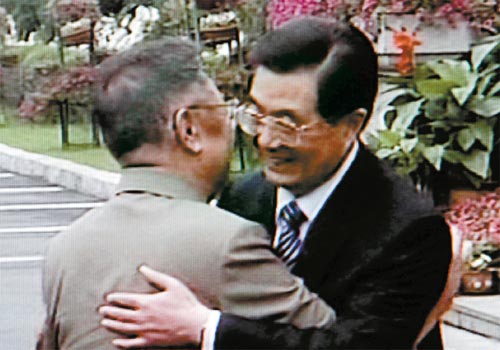 At a cabinet meeting yesterday morning, President Lee Myung-bak reacted positively to Kim’s trip. “I think it is positive for Kim to frequently visit China,” Lee said through spokeswoman Kim Hee-jung. “It will provide more opportunities for him to observe Chinese-style economic developments, and Kim’s trips to China will bring about positive effects on the North’s economy.”

Kim wrapped up a surprise five-day trip to China Monday, and the state media of North Korea and China reported that he met with Chinese President Hu Jintao.

Experts in South Korea worry that the trip will create a new confrontational atmosphere in Northeast Asia. Since the sinking of a South Korean naval vessel in March - which Seoul and the United States blame on Pyongyang - China and North Korea have bolstered their ties. South Korea and the U.S. have tried to get the international community to join them in punishing the North for the attack.

The Blue House said yesterday that such a concern was based on obsolete Cold War-era thinking, stressing that Seoul’s ties with Beijing have remained steady and strong.

She stressed that South Korea’s relationship with China won’t be disturbed by the North Korean leader’s trip.

“Over the past few days, concerns were raised that the U.S. and South Korea will become an axis, while China and the North will become another, reviving a Cold War confrontation,” she said. “The Blue House believes that such an interpretation is a misunderstanding about complex international affairs by treating the current situation with only a black-and-white view.”

The state media of North Korea and China stressed different aspects of the trip in both of their confirmations on Monday.

China highlighted efforts to resume the stalled six-party talks as one of the key elements of Kim’s summit with Hu, as well as China’s desire for North Korea to implement economic reforms. According to China’s Xinhua News Agency, Hu told Kim that “economic development calls for self-dependence but cannot be achieved without cooperating with the outside world.”

According to Xinhua, Kim praised China’s achievements, noting that he wants to strengthen exchanges and cooperation with China.

In contrast, North’s Korea Central News Agency emphasized China’s support for the country’s power succession and the deep friendship between the two countries.

“Amidst complicated international affairs, it is our historical mission to hand over the baton of the North Korea-China friendship to the next generation,” Kim told Hu on Friday in Changchun, according to the KCNA.

According to the report, Kim also said strengthening and developing the North Korea-China friendship generation after generation is the key to peace and stability in Northeast Asia and the world.

Neither country confirmed whether Kim’s youngest son and heir apparent, Kim Jong-un, accompanied his father to China. Jong-un is expected to make his political debut at the Workers’ Party delegates conference early this month. North Korean media said Hu expressed his support for a successful conference.

Xinhua said Hu pushed efforts to resume six-party nuclear talks as soon as possible to ease tensions on the Korean Peninsula. The report said Kim appreciated China’s efforts and expressed his hope for an early resumption of the talks. North Korean media didn’t mention the talks.