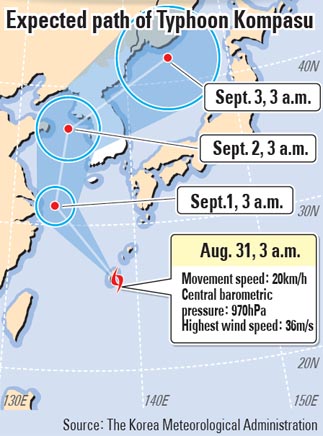 Jeju Island is likely to be battered by Typhoon Kompasu starting this morning, and strong winds and torrential rain will batter the entire Korean Peninsula through tomorrow.

The state-run Korea Meteorological Administration forecast that Kompasu, which is moving northward at a speed of 40 meters (131 feet) per second from Okinawa, Japan, will become a giant typhoon that will affect areas within a radius of 500 kilometers (311 miles) by this morning.

Meteorologists said global warming has produced a rare weather phenomenon in which three typhoons are moving together around Taiwan and Okinawa.

Aside from Kompasu, two other typhoons - Namtheun and Lionrock - are moving into the same area.

“It’s like the ocean is boiling, triggered by global warming, just like boiling water in a pot,” a meteorologist said. “La Nina, originating from the east Pacific Ocean, has pushed warm water to the west Pacific Ocean, and the high atmospheric pressure on the north Pacific ocean makes the water hotter and evaporate.”

Experts say global warming is bringing sweltering temperatures, floods and droughts in summer and heavy snows in winter all around the globe. It’s also changing the ecosystems of animals and plants.

In the case of Korea, it’s now hard to catch pollack in oceans surrounding the peninsula. Pollack live in cold currents of the ocean, and they’re disappearing to be replaced by anchovies, which thrive in warmer waters.

The National Fisheries Research and Development Institute said because of the rise in sea water temperatures, cutlassfish, anglerfish and herring are moving northward.

The rise in temperature is also changing the fruits harvested in Korea.

Jeju Island, the home of sweet tangerines, is now growing mangoes, which are a tropical fruit.