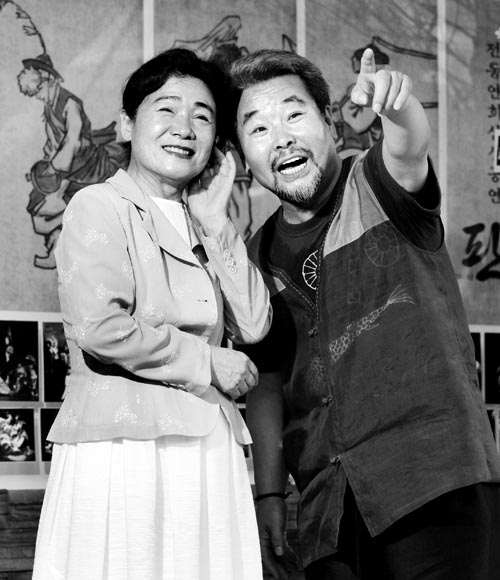 Throughout their 40-year friendship, An Sook-sun, left, and Kim Duk-soo have collaborated numerous times, most recently in a demonstration of digital restoration technology in May. [JoongAng Ilbo]

It was 1959 and she was participating in a national nongak (traditional Korean farmers’ music) competition in Namwon, North Jeolla.

During a break in the competition, Kang Baek-cheon, a master daegeum (bamboo flute) player and founder of the Namwon Center for Korean Traditional Performing Arts, came up to her and told her he had seen an incredible sight. There was a young child hitting the janggu (a double-headed drum) while twirling a sangmo (a hat with a festive string attached) on his head so fast that he looked just like a human top.

That boy was none other than Kim.

The two nationally revered artists would eventually develop a long-standing professional relationship. But it took time.

Although they had both heard stories about one other for years, they didn’t actually meet in person until the 1970s.

They performed together for the first time in 1996 in a piece called “Gonggam.”

The two boasted that tickets for the performance were completely sold out and that those who could not buy tickets in advance had to watch it in the lobby standing up.

They were reunited in 1998 for a performance in Pyongyang, where An sang “Chunhyangga,” a classic from the pansori repertoire, as Kim accompanied her on the drums.

Kim remarked on how nervous he felt during that performance, to which An responded that she could tell just how he was feeling because she stopped singing for a moment to put in a chuimsae (a short phrase shouted during a song or performance to encourage the performers), saying, “Well played!”

Although the two now have a serendipitous relationship, they have also had their disagreements, particularly about musical styles.

Kim, the younger of the two, presses An to try new types of music, while An typically tries to put a lid on Kim’s exuberance.

“I tell Kim when I think he’s being too reckless,” An said. “Who else would give him that kind of advice?”

Kim replied: “We are like brother and sister. Each of us can tell what the other is thinking, and in what manner we will sing, simply by glancing at one another.”

Most recently, the two appeared at the opening of the Unesco World Conference on Arts Education, in a performance that pushed both of them into new territory.

Their performance, called “Digilog Samulnori,” was presented as an example of digital restoration technology Korea is using to advance its cultural preservation efforts.

In the 3-D presentation, hologram avatars of An, Kim and percussionists moved with the music, captivating audiences with their sound, rhythm and colorful stage design.

It was their first performance together in 14 years - and it almost didn’t happen.

An was initially against the idea of doing a performance with Kim because she felt that her study of sori, or traditional Korean singing, was already more than enough work for her. Many people around her also wondered whether her voice would mix with, or be heard over, the sheer volume generated by the samulnori quartet.

Kim eventually talked her into it, telling her that even traditional Korean music needs a fresh new twist sometimes.

But even though Kim felt strongly about An’s participation in the performance, he was not unsympathetic to her devotion to sori.

Kim said that although he majored in the piri (bamboo flute), he minored in sori, but that he now regrets not having studied sori more.

An responded by joking that after Kim started playing the janggu, he had to attend so many social events where he had to drink with colleagues that he had spoiled his voice.

Later this month, the duo will return to the stage for a performance of Gonggam at the Aram Nuri Arts Center in Goyang, Gyeonggi,