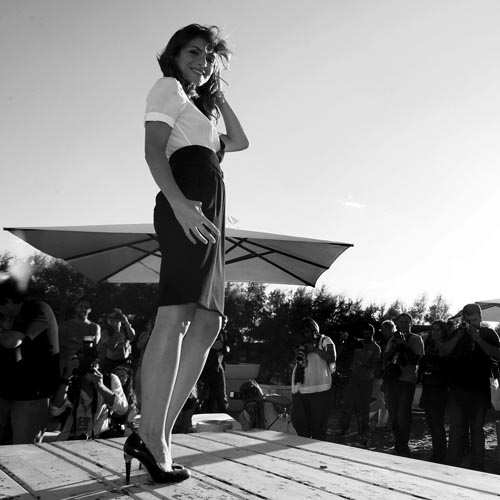 
VENICE - The Venice film festival opens on Wednesday with “Black Swan,” starring Natalie Portman as a ballet dancer in New York whose position is threatened when a beautiful newcomer arrives.

The thriller, directed by Darren Aronofsky, officially kicks off the annual celebration of cinema on the Lido waterfront where stars, fans and reporters rub shoulders for 11 days.

Festival director Marco Mueller has opted for youth in his choice of directors of the 23 competition films, and he will also hope that the presence of Hollywood mavericks can make up for the expected shortage of A-list celebrities this year.

Jury president Quentin Tarantino, who must ultimately decide who walks away with the coveted Golden Lion award at the closing ceremony on Sept. 11, said his time on the picturesque island would be more work than play.

“There’s a lot of really exciting movies, exciting directors. It’s a fantastic line-up,” he told Reuters on arrival. “I’m keen with anticipation. I’ve been on a few juries and I love it. It’s a joy to me. But it’s work. We’re not here for vacation.”

Venice, the world’s oldest film festival, has long been looking over its shoulder at Canadian rival Toronto, with which it overlaps and which is seen as cheaper and more business-focused than the Italian event.

The competition has intensified, as many movies with world premieres in Venice hit Toronto just days later and others go straight to the Canadian festival.

Mueller said he believed the two events could continue to exist side-by-side.

“I’m quite convinced that Venice is still strong,” he told Reuters, adding that “the visibility, the impact of a film is created here and the market potential of the film is then completely assessed only in Toronto.”

The average age of filmmakers in the main competition this year is an unusually low 47, and includes 41-year-old Aronofsky, winner of the Golden Lion in 2008 with “The Wrestler,” and Oscar winner Sofia Coppola, 39, with comic drama “Somewhere.”

At the other end of the age range are Monte Hellman, 78, competing with low-budget crime drama “Road to Nowhere,” and Polish filmmaker Jerzy Skolimowski, 72, on the Lido with the thriller “Essential Killing.”