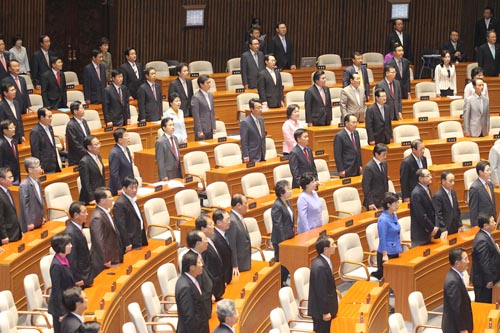 Lawmakers attend the opening ceremony of the 100-day regular session of the National Assembly yesterday in Seoul. [YONHAP]


On the first day of the full session of the National Assembly, lawmakers wrestled over calling for a parliamentary vote on approving an arrest warrant for Democratic Party Representative Kang Sung-jong, who allegedly embezzled 8 billion won ($ 6.7 million) in school funds and used the money to finance political activities during his term as a chairman from 2001 to 2008.

Under Korean law, a lawmaker is immune from arrest while the National Assembly is in session and he or she can be arrested only when lawmakers approve it.

Another GNP official said the GNP will go ahead with its plan to vote today on backing Kang’s arrest, regardless of opposition from the DP.

“We explained this matter to other opposition lawmakers and we sought their cooperation,” said a GNP official who asked not to be named. “Because there’s no plenary meeting scheduled for tomorrow, we just requested to hold one tomorrow.”

The GNP’s request was accepted at the assembly at 2 p.m. yesterday but Kang’s arrest approval vote needs to be completed before 2 p.m. Saturday, when the request expires.

Under National Assembly law, lawmakers can convene a parliament when a quorum of one fourth of the 299 assembly members agree. The math is in GNP’s favor because it holds 172 seats in the assembly, while the main opposition Democratic Party occupies 87 of the 127 seats that belong to opposition parties.

The fate of Kang will be decided by a majority vote in the assembly.

“If the person is not a brutal criminal and there is no concern of fleeing or the destruction of evidence, it’s desirable to have the person indicted without being detained,” Park said.

Meanwhile, political observers said rough times are ahead for National Assembly members because they need to take up contentious bills, such as allotting next year’s budget for one of President Lee Myung-bak’s key projects - the four rivers restoration project - and ratification of the Korea-U.S. free trade agreement bill.