Bullet trains coming to a town near you by 2020

Bullet trains coming to a town near you by 2020 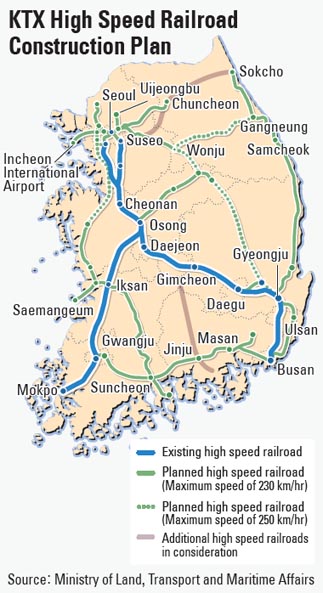 High-speed rail networks will be expanded to connect major cities, and travel time within 95 percent of Korea will be reduced to two hours or less by 2020, the government announced yesterday.

Korea Train Express (KTX) will run on many more lines, and conventional trains will be enhanced to run at a maximum speed of 250 kilometers per hour (155 miles per hour). KTX will be connected to Incheon International Airport in 2012.

According to the plan, the Gyeongbu express railway connecting Daegu and Busan will be opened in November, and Daejeon and Daegu will be connected in 2014.

The Honam express line connecting Osong and Gwangju will be finished by 2014; Gwangju and Mokpo will be connected in 2017; and Gangnam, Suseo and Pyeongtaek in 2014.

Conventional routes currently under construction will be straightened to boost the trains’ maximum speed to 230 or 250 kilometers per hour.

“Roads have reached their limits, and it’s time to utilize railroads to make the whole country fall into an hour and a half travel zone,” said President Lee Myung-bak in a meeting held at Korea Railroad Research Institute in Uiwang, Gyeonggi. “This will not only create economic advantages but also provide us with a grand strategy to stay competitive for the upcoming era of green growth and to address the issue of climate change.