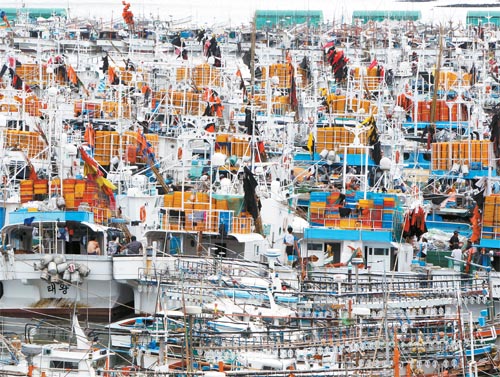 As this year’s seventh typhoon, Kompasu, moves northward up the peninsula, hundreds of fishing boats dock at Hallim Harbor, Jeju City, for shelter. The government is preparing for major damage. [YONHAP]


Typhoon Kompasu battered Jeju Island with heavy rain and winds, forcing the cancellation of all ferries to and from the island. Mount Halla was blocked off to tourists as a safety precaution, the Jeju Disaster Prevention and Countermeasures Headquarters said yesterday.

The Korea Meteorological Administration activated a typhoon warning for the Jeju area at 1 p.m. yesterday, and the government is on full alert to beef up rescue and evacuation plans.

“Unlike other typhoons in the past, the projected path and size of Kompasu makes us think it will cause severe damage,” Minister of Public Administration and Security Maeng Hyung-kyu said in a video conference with local government officials yesterday.

The Ministry of Land, Transport and Maritime Affairs and K-Water, the state-run water agency, are closely monitoring four rivers restoration project sites, and they discharged water from six dams near them.

The storm center passed southwest of Seogwipo, Jeju, yesterday afternoon and is moving northwestward at a speed of 40 meters (131 feet) per second, affecting areas within a radius of 300 kilometers (186 miles).

Meteorologists at the government-run weather agency forecast that Kompasu, named after the Japanese pronunciation of “compass,” will pull away from Jeju Island and move to the central regions of the Korean Peninsula, including Seoul, at noon. About 60 to 150 millimeters (2.4 to 5.9 inches) of rain are expected in central regions today.

“The typhoon will become a bit weaker tomorrow morning, with speeds of 36 meters per second and affecting an area of 280 kilometers,” Kim Nam-uk, an official at the KMA said. “It seems like the typhoon won’t get more intense because the water temperature of the Yellow Sea - a major energy source of typhoon movement - isn’t high enough.”

The National Emergency Management Agency advised people who reside in low-lying areas at risk of landslides or flooding to park their cars on higher ground, secure roofs and check drainage in their neighborhoods.