Moveable type may date back to 1239, says scholar

Moveable type may date back to 1239, says scholar 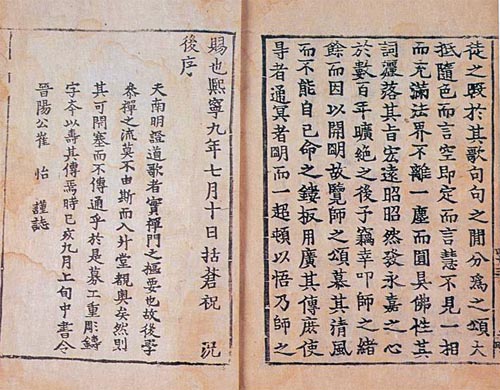 The copied version of the Jeungdoga, which scholars have compared to the recently discovered pieces of moveable type. Some say the characters on the moveable type match those in the reprint. [Yonhap]


Roughly fifty pieces of movable metal type excavated in Korea have some scholars believing they could be the oldest in human history, but the discovery is likely to remain controversial until their anonymous owners come forward and say where they found them.

Some of the pieces unveiled for the press yesterday had remains of ink and dirt on them, and a few were missing parts of characters.

“Looking at the surfaces, the type seems to have gone through extensive use,” said Nam Kwon-hee, 54, professor of library and information science at Kyungpook National University.

Nam, who was given the pieces by the anonymous discoverers several years ago, believe they are the type used to print the “Jeungdoga,” a Zen Buddhist tract dating to 1239. Scholars have long known the original Jeungdoga was printed by moveable type but never found any pieces. The original book itself has been lost, but it was copied by a medieval scholar onto carved wooden slabs and reprinted.

Previously, the oldest moveable type found in Korea were two pieces used to print “Jikji,” another Buddhist tract, in 1377, which is recognized by the United Nations Educational, Scientific and Cultural Organization as the oldest in the world. One piece is in South Korea and the other in North Korea.

Johannes Gutenberg printed his Bible in Mainz, Germany, in the 1450s.

Experts who have examined the newly found pieces assume they originate from the Kaesong area in North Korea.

Nam said the anonymous owners asked him to inspect the pieces around four or five years ago. They are roughly 1.1 to 1.3 square centimeters (0.17 to 0.2 square inches) - about the size of an adult fingernail - and weigh around 4.5 grams each.

“I matched the pieces up with the Jeungdoga on a hunch,” Nam said, “because some of the letters are ancient characters that are not in common use anymore, but the typeface, size and strokes matched up to the point it was surprising,” said Nam.

For example, both downward long strokes on the sides of the Chinese character for wind (風) had ends bent upwards. In current usage, only the right hand stroke bends up.

Another professor of library science, Kim Sung-soo of Cheongju University said the pieces cannot be forged because the typeface is impossible to replicate.

Around 10 pieces from the collection will be placed on public display in Seoul starting tomorrow at the Daboseong Antique Gallery, according to Kim Jong-chun, CEO of the Korean Antique’s Association.