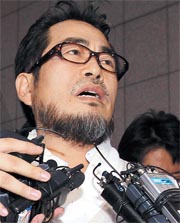 The Seoul Metropolitan Police Agency summoned Min Hong-gyu, chief of the government’s great seal management team, to investigate whether the great seal of Korea was made in traditional fashion or whether Min used modern techniques, such as a plaster mold. Police raided Min’s house and workplace last Friday to search for traditional materials and tools but found none.

The great seal of Korea, a phoenix-shaped chop or stamp the president uses to approve important state matters, became controversial after Min was accused of either pocketing 900 grams of leftover gold from when the seal was made in 2007 or using it to make miniatures as gifts for high-profile politicians.

Min, in a white Korean traditional coat, showed up at the Seoul Metropolitan Police Agency yesterday.

“The traditional process of manufacture has been well preserved until now,” he told reporters. “The fourth great seal has been baked [per tradition] in a kiln located in Sancheong, South Gyeongsang. Details will be revealed at the upcoming summons.”

Asked if he could demonstrate how to make the seal in the traditional way, Min kept silent, though his lawyer said he could.

After searching Min’s house last Friday, the police suspect Min might have used a plaster mold in the process, which is a modern method. The traditional method uses dirt to make a mold. Police investigators said no traditional materials, such as molds or a ceroplastic model, were found in Min’s house or workplace.

The Seoul police is conducting a probe of Min, his assistant and other members of the seal management team since the Ministry of Public Administration and Security requested Min be investigated for fraud and embezzlement.