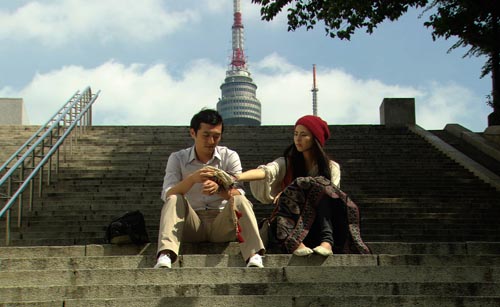 
In the new low-budget film “Seoul,” the city becomes the setting for a Gen X-type boy-meets-girl romance that tries to achieve a vibe reminiscent of director Richard Linklater’s 1995 cult hit “Before Sunrise.”

The girl, a Korean adoptee (played by musician/actress Park Ji-yoon), wears boho-chic clothes and likes actress Helena Bonham Carter. The boy, played by actor Lee Ho-yeong, is a photographer who hopes to be a film director and worships Stanley Kubrick and Tim Burton.

The two like-minded youngsters discuss books, movies, aliens and past relationships and pose existential questions about love while wandering around Seoul. They kiss, break into an old palace at night, continue their pseudo-intellectual talk and part ways in the morning.

The film is an all-out “talkie,” in which the dialogue is the central attraction. Unlike the sharp, insightful dialogue in “Before Sunrise,” however, the conversations in this film manages to drain the life out of the movie.

In fact, the dialogue between the two is less like an actual conversation and more like occasional literary and pop culture references and random, often supercilious musings.

In one scene, the boy talks about the sci-fi film he’d like to make one day, involving an alien female protagonist who feels lost in the universe. The girl says she relates to this character in feeling alone and says she empathizes with the alien as she discusses her adoptive parents.

“Are you sure you’re not a writer?” the boy asks.

The scene reeks of college kid pretentiousness and I felt as though I was back at a university bar somewhere trapped in an endless conversation about Jack Kerouac or Nirvana.

The painfully awkward acting by both Park and Lee doesn’t help matters either. Their interactions felt stiff and any spiritual or physical connection between them seemed artificial.

“Seoul” is the first in a series of films titled “Movies Meet Korea.” Each feature showcases major Korean cities and each will be made by an up-and-coming local director.

The film has merit in that the camera often lingers on stylish shots of City Hall, Namsan and other landmarks or reframes them with a certain edginess. For instance, the scene in which the characters engage in their first kiss inside a cable car on Namsan, is quite lovely. The camera reflects the abrupt awkwardness of the kiss as it spirals down with the cable car. But these shots were not nearly enough to save the film from its lack of content and the film ultimately drowns in a pool of utter smugness.