“After.Life” offers up an interesting premise for viewers. Anna (Christina Ricci) gets put in a frightening situation when she wakes up from a car crash inside a funeral home and realizes she is being prepped for burial. Eliot (Liam Neeson), the funeral director, tells Ricci she’s actually dead and that she must come to terms with her fate. But Anna’s boyfriend Paul (Justin Long) suspects that Eliot is hiding something and tries to save her, which is too bad because she’s stuck in the funeral home with nobody to turn to except the obviously mistrustful Eliot.

As the funeral gets close it could be too late for Anna and Paul, as Anna gets closer to crossing to the other side. 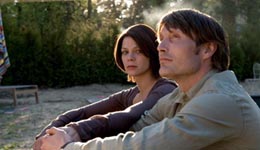 Some movies are just blind entertainment.

But the best movies are designed to make you feel and think, and “The Door” will do just that.

Mads Mikkelsen, of “Casino Royale” fame, stars as David, an emotionally torn husband and father who must relive the past to try to make up for the mistakes he’s made.

A few years after finding his daughter drowning in a pool - David left her unattended because he was having a sexual encounter with a woman he was having an affair with - David finds a door in a tunnel that transports him back in time to when his daughter was still alive.

It’s a startling revelation for him, and what David does now is completely up to him.

Will he save his daughter and repair his marriage? Can he fix the problems of his past to have a better future? Or is he doomed to be stuck in a never-ending cycle of past, present and future?

These are all questions that people end up asking themselves and director Anno Saul treats them all seriously enough that “The Door” could be worth a trip to the theater.

It may be a tired genre for many Americans, but suburban dystopia and its riveting but familiar cast of characters are explored once again in “Lymelife,” a 2008 film produced by Martin Scorsese and directed by Derick Martini.

Set in Long Island, New York, in the late 1970s - in the midst of the national malaise during the waning days of the Carter administration - the movie mainly revolves around Scott Bartlett (Rory Culkin), a 15-year-old boy in hot, shy, angst-ridden pursuit of the girl next door, Adrianna (Emma Roberts).

But Lymelife also finds its pain and emotion in the families of the two young potential lovers: Scott’s parents (played by Alec Baldwin and Jill Hennessy), as well as Adrianna’s (portrayed by Timothy Hutton and Cynthia Nixon), are a walking, talking tornado of suburban suffocation and dark, hidden pain: adultery, abuse and - the movie’s namesake - Lyme Disease.

Lymelife is no “American Beauty,” but its strong cast and compelling narrative make the film worth the hassle of reliving your own suburban nightmare past. 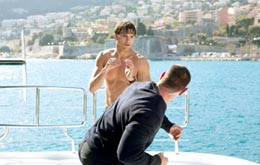 Put Ashton Kutcher and Katherine Heigl together in an espionage-comedy themed movie about trying to evade some unknown assassins and you get something called “Killers.”

Kutcher plays Spencer Aimes, a former government spy who decides to settle down and live a normal married life with Jen (Heigl). But there’s a bounty on Aimes’ head and the two have to figure out who is after him and why.

This leads to comedic situations in which they try to guess who - the culprit could be anyone from their friends and family, to the local grocery store clerk and random people walking on the street - is trying to kill Aimes.

In yet another Korean film about revenge, people are - again - victimized, lose their mind, become violent and kill people here and there. And let’s not forget about the prerequisite flood of blood, guts and limbs.

That’s basically what happens in “Bedevilled,” directed by Jang Cheol-soo - a tale of Bok-nam (Seo Young-hee), a woman who lives on a remote island that seems more akin to a perverse grown-up version of “The Lord of the Flies” than, say, Jeju.

Bok-nam works hard and gets beaten, raped and shunned by more or less everyone on the island. She is sad and wants to join her friend, Hae-won (Ji Sung-won), in Seoul. But Hae-won is sad, too. Then Bok-nam decides to seek vengeance. Cue the gore.

Bedevilled is a fast-paced film, one that will either keep you on the edge of your seat or make you run for the door.