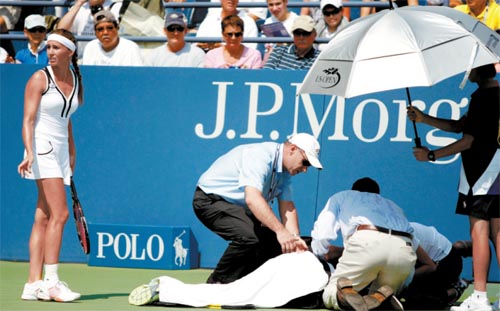 Gisela Dulko of Argentina, left, stands nearby as medical personnel attend to Victoria Azarenka of Belarus who collapsed during their match in the US Open tennis tournament in New York on Wednesday. [REUTERS/YONHAP]


NEW YORK - Sweltering conditions and gusty winds proved a handful at the U.S. Open on Wednesday, but it was a simple training stumble by Belarus starlet Victoria Azarenka that shocked fans.

The 10th seed was down 5-1 in a second round tie against Argentina’s Gisela Dulko when she suddenly collapsed in a heap behind the baseline.

She received medical treatment for several minutes before being taken away in a wheelchair to a hospital for tests on her condition. With temperatures at Flushing Meadows once again soaring into the 30s Celsius (90s Fahrenheit), first indications were that she had fallen victim to the extreme conditions.

But Azarenka later shed light on the incident by explaining in a statement that she had fallen in the gym prior to her match while running a sprint and had stumbled forward, hitting her head and arm.

“I was checked by the medical team before I went on court and they were courtside for monitoring,” she said. “I felt worse as the match went on, having a headache and feeling dizzy. I also started having trouble seeing and felt weak before I fell.

“I was taken to the hospital for some medical tests and have been diagnosed with a mild concussion.”

A former top junior tennis player, Azarenka is regarded as one of the best young players in the world at the moment and had been expected to make a run at the title here.

The sole U.S. seed in the women’s draw won through 7-6 (7-3), 6-3 to set up a third-round tie against another qualifier, Mandy Minella of Luxembourg, who upset 32nd seed Tsvetana Pironkova of Bulgaria.

But she was made to scrap for it all the way, especially in a first set that saw Marino - who at 19 was 11 years younger than her opponent and playing in just her second WTA Tour-level event - regularly out-hit the two-time former champion in New York.

Williams had trouble with her serve action as the hot morning conditions on the Arthur Ashe Stadium Court were joined by gusting winds in the afternoon. Marino used a big serve and forehand to stay with Williams 3-3 in the tie-breaker, before the sole U.S. seed this year ran off four points in a row to move ahead. The American won three games in a row to move up to 4-1 in the second set and then served out to advance to the third round.

“It was challenging, not just with the conditions, but also my opponent. She served so well and mixes up her shots,” Williams said.

“It seemed like every time I had an opening she came up with a big serve, so I guess I know what it’s like now playing myself.”

The 30-year-old, who played the best tennis of her life to lift the French crown in Paris in June, said that although she was pleased with the way she had played, she still needed to improve.

“It was nothing special because I want to serve better. I want to play some more aggressive shots,” she said. “I want to become much more strong, and from the baseline go pushing to the net. I want to do this.”

Just as impressive was former French Open champion Ana Ivanovic, who looked more like her old self in crushing China’s Zheng Jie 6-3, 6-0 in the opening match on the Arthur Ashe Court.

The 22-year-old Serb has been mired in a rut since winning the French Open in 2008 and taking the world No. 1 spot.

She failed to cope with sudden celebrity status and saw her world ranking plummet in 2009.

But after taking on Steffi Graf’s former coach, Heinz Gunthardt, as her mentor in February this year, Ivanovic has been gradually working her way back.

“I feel like I am playing like a top-10 player again and my confidence is there, which is huge for me,” Ivanovic said.

Dulko, who advanced on the back of Azarenka’s collapse, will next play rising Russian star Anastasia Pavlyuchenkova, who ended the hopes of Sania Mirza of India 6-2, 6-4.