Going around and through, not up

Going around and through, not up 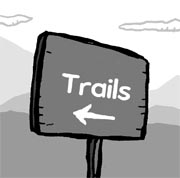 There are three types of mountain climbing.

The first one is common in underdeveloped countries, where people venture into the mountains to get food and wood rather than for pleasure.

The second type is found in developing countries, where climbers view scaling the tallest mountains as a lifetime goal and often try to one-up each other by getting to the top in record time.

In these countries, climbing mountains is seen as a competition, a challenge and a chief goal in life rather than a necessity.

For these people, mountains offer an endless, Sisyphean task - something they must do over and over again. But unlike Sisyphus, these climbers find pleasure in their task.

Still, they often turn a blind eye to the irrationality of having to climb all the way back down after scaling a peak, which is often the most dangerous and trying part of the whole adventure.

The third type of mountain climbing is found here in Korea, where heading for the hills is increasingly seen as a spiritual journey - a way to get in touch with nature and an opportunity to escape the stresses of everyday life. The goal here is to hike and enjoy the surroundings, not to embark on a gruelling climb to the top.

Some say mountain climbing starts at the point where roads end. But there are tracks and passages in all directions in most mountainous areas in Korea. The trails on the mountains surrounding Seoul - such as Bulam, Surak, Dobong and Bukhan - are constantly crowded with hikers, which is why many locals call them mountain highways.

Some hikers claim they can finish the whole course through these mountains in 24 hours. Um Hong-gil, a veteran Korean climber who has scaled all the mountains in the Himalayas taller than 8,000 meters (26,247 feet), is sometimes even overtaken by beginners when hiking Mount Bukhan, which is less than one-tenth of the height of the Himalayan mountains.

This type of hiking, where people follow footpaths that wind around - rather than up - mountains, is becoming increasingly commonplace in the Seoul area.

The first such path was built around Ganghwa Island, with others cropping up later around Mount Naejang and Wolchul. Now there’s also one around Mount Bukhan.

The Korea National Park Service welcomes this new trend, because local mountain peaks have been greatly damaged by crowds clamoring to get to the top and laying waste to nature on their way up.

I sincerely hope that the footpath around Mount Bukhan will restore composure and a sense of consideration in the climbing community, making it easier for everyone to enjoy the beauty of the natural surroundings so close to the city center.