After court rules, governor takes over in Gangwon

After court rules, governor takes over in Gangwon 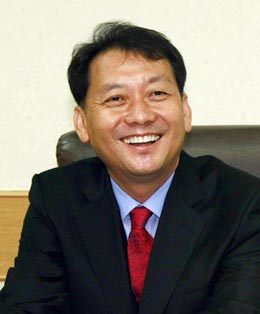 Gangwon Governor Lee Kwang-jae took over the post for the first time, after the Constitutional Court ruled yesterday that a law barring him from performing his duty is unconstitutional. It was 63 days since Lee was elected to head the provincial government.

Lee, who had been convicted of receiving bribes, had been barred from working as the governor of Gangwon after he won the local elections.

Under Clause 1 of Article 111 of the Local Autonomy Act, the head of a local government is barred from performing his or her duty when the official is sentenced to imprisonment without prison labor or a heavier punishment, which has yet to become final. The deputy head of the local government shall act in place of him or her, the law states.

On July 6, Lee filed a petition with the Constitutional Court to challenge the clause, which prevented him from performing the duty even though his conviction had not been finalized by the Supreme Court.

In its ruling, the court said the clause in the Local Autonomy Act goes against the presumption of innocence, in which a suspect is considered innocent until proven guilty.

Lee, who was a lawmaker of the Democratic Party, was elected as the Gangwon governor in the June 2 local elections. The governor-elect, however, was found guilty by the Seoul High Court nine days after the victory for receiving bribes from two businessmen between 2004 and 2008.

Although Lee was scheduled to assume his post on July 1, the conviction and the subsequent punishment barred him from doing so under the law governing local governments. Lee, who filed an appeal of the ruling to the Supreme Court, challenged the clause and filed a constitutional petition.

The Constitutional Court also said yesterday that the clause is no longer effective and ordered a formal revision by Dec. 31 of next year. If no revision is made by then, the clause will automatically become invalidated.

Although Lee began working as the Gangwon governor yesterday, he will still lose the seat if the Supreme Court upholds his conviction. A local government head who is convicted of violating the political funds law and receives a punishment harsher than 1 million won ($847) in fines will lose his or her seat. Lee was fined 114 million won.

“The Constitutional Court made an expedited ruling, and I think it is a proof of hope,” Lee said in a press conference yesterday. “I will fight against injustice with the Supreme Court appeal.”

Lee also made his intent clear to solidify alliances. “I will visit Russia’s Maritime Province in October with South Chungcheong and South Gyeongsang governors to find a solution to the hardships of livestock farmers.”