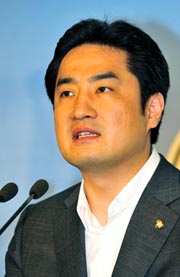 The ruling party held a lawmakers’ meeting and expelled Kang, 41. It was the first time that the GNP endorsed the expulsion of a party member.

While Kang is no longer a member of the GNP, he will still represent Mapo B District of Seoul, unless the National Assembly were to take away his post.

The expulsion bars Kang from rejoining the party for the next five years, though the party’s leadership could allow an exception.

If he had left on his own, there would have been no restriction preventing him from returning to the party at a later date.

The GNP said 136 of the party’s 172 lawmakers attended the meeting, and all of them agreed to expel Kang. No voting took place, however.

Kang did not attend the session.

In addition to the expulsion from the ruling party, Kang also faces a criminal indictment. Prosecutors said yesterday that they plan to indict Kang on charges of having made a false accusation against the JoongAng Ilbo and its reporter, who broke the story about the lawmaker’s sexually inappropriate remarks to university students.

In a July exclusive, the JoongAng Ilbo reported about Kang’s lewd remarks made at a dinner with about 20 university students, about half of them female.

Kang denied the report and filed a defamation suit against the newspaper and the journalist.

A group of students who had attended the dinner, however, held a press conference a few days later to back the reporter and criticized the lawmaker for lying.

“We confirmed that Kang indeed made the sexually inappropriate remarks,” an official from the Seoul Western District Prosecutors’ Office said. “So we have decided to press a false accusation charge against Kang for filing the defamation suit against the reporter.”

Kang will also likely face a defamation charge because he had held a press conference and issued statements saying that the JoongAng Ilbo report was a lie.

He also will likely be indicted for defaming female newscasters over allegations that he made sexually inappropriate remarks about anchorwomen.