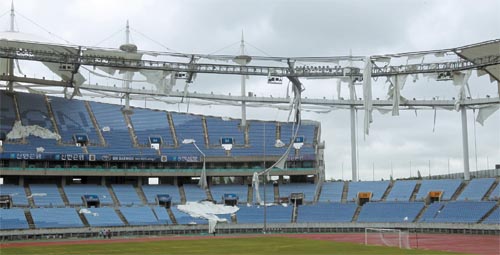 A canvas roof of Munhak Stadium in Incheon was shredded by the gale-force winds of Typhoon Kompasu, which pounded the nation yesterday morning, cancelling flights, wiping out orchards and leading to commuter chaos in metropolitan areas. [YONHAP]


Typhoon Kompasu hit the Korean Peninsula hard, killing three people, stopping subway trains on their tracks and blacking out 1.56 million houses and buildings across the country, according to the National Emergency Management Agency.

Metropolitan commuters were acutely affected when power to the KTX and subway lines No. 1 and 4 were cut for two to three hours. The Korea Electric Power Corp. estimated damage from the blackouts to be 1.59 billion won ($1.34 million).

All kindergartens in Seoul and Gyeonggi were closed, and 15 elementary, middle and high schools in South Chungcheong cancelled classes. Seoul schools delayed their start for two hours.

“One distinguishing feature of Kompasu was that it moved very fast with strong winds, as its jet stream, a fast-moving high-altitude wind, was vigorous,” said an official at the state-run Korea Meteorological Administration. “It was a powerful typhoon.”

The administration said that Kompasu, the Japanese pronunciation of the English word “compass,” is the first typhoon to get near Seoul in 10 years.

Although the Seoul city government quickly dispatched 270 buses to ferry stranded subway passengers, tens of thousands of commuters suffered from congestion on the wet roadways, some blocked by trees felled by 21-meters-per-second (68-feet-per-second) winds.

Domestic and international flights were delayed and cancelled yesterday morning. At Incheon International Airport, flights to or from Shanghai and Tsingtao were cancelled.

The National Emergency Management Agency said three people were killed in the typhoon.

A 37-year-old man surnamed Hyeon in Bundang, Gyeonggi, was hit by a snapped tree branch at 6:30 a.m. He died hours after being taken to the hospital. A security guard at the victim’s apartment said that the branch hit Hyeon in the face.

An 80-year-old man surnamed Yang in Seosan, South Chungcheong, was killed after being hit on the head by a flying roof tile at 5:14 a.m. while checking the condition of his roof.

A 76-year-old man surnamed Kim of Mokpo, South Jeolla, was electrocuted when he tried to restore power to his house.

As the weather agency forecast, the North Gyeonggi region was hit hard by the storm.

A total of 950 hectares of fruit farms in Anseong, Pyeongtaek, Hwaseong, and Namyangju lost massive amounts of fruit. Six fishing boats in Hwaseong and Ansan were sunk, and three greenhouse roofs were blown off in Hwaseong.

Over 416 trees were knocked down onto the roads in Gyeonggi.

The winds destroyed the exterior walls of the Anyang Correction Center yesterday morning, but no one was injured and no convicts escaped, an official said.

The Ministry of Public Administration and Security estimated that at least 39 small- and mid-sized companies were battered by heavy rains between July and August, and it estimated more will suffer from Kompasu. “The Small and Medium Business Administration will offer 25 billion won in natural disaster relief funds to help businesses,” Lee Jang-hoon, a ministry official, said. Jeong Sun-ae, a 75-year-old female vendor at the Yeongdeungpo fruit market found that the six parasols she uses for her stall were destroyed by the storm.

“I just had a loss of 1 million won today,” Jeong said. “But perhaps I’m lucky compared to the orchard owners who must have suffered a terrible loss of fruit.”