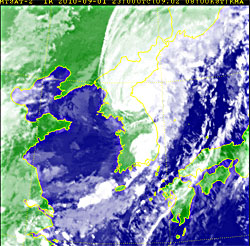 With almost all above-ground sections of Seoul's subway lines out of service, trees knocked down and winds blowing at a speed of about 30 meters per second, drivers, commuters and students were forced to undergo the worst transportation chaos in a decade.

Meteorologists say Kompasu, which means "compass" in Japanese, is the strongest tropical storm to hit the Seoul metropolitan area in 15 years.

They said winds of 52.4 mps were recorded on Hong Island, off the nation's southwest coast, as of 8 a.m., marking the strongest wind since 2000, when a gust speed of 58.3 mps was reported on the peninsula.
In Seoul, the maximum wind speed reached 29.5 mps in eastern parts of the city, which is powerful enough to destroy shoddily built houses, they said.

The seventh typhoon of the year made landfall on Ganghwa Island on the west coast at 6:35 a.m. and passed over Cheorwon, about 80 kilometers northeast of Seoul, at a speed of 23 kilometers per hour at 9:00 a.m., according to the Korea Meteorological Administration (KMA).

An 80-year-old man in Seosan, South Chungcheong Province, was killed after being hit by a flying roof tile, the agency said.

In Bundang on the southern outskirts of Seoul, a broken tree branch hit and killed a 37-year-old man, who was leaving for work, while a 38-year-old resident of Bucheon, west of the capital, was injured by a flying cover from a food cart.

Four people were injured by broken glass in Taean, South Chungcheong Province.
Emergency rooms at Seoul's major hospitals were crowded with people who were injured by fragments of broken house windows and downed trees. Three patients were admitted to Hanyang University Medical Center in eastern Seoul after being hit by flying signboards and broken glass.

According to government officials, a massive power outage affected mass transportation, disrupting the operations of Subway Line 1 that links Seoul with Inchon and Suwon and the above-ground section of Line 4 that links the capital to Ansan on the west coast.

The operations of manufacturing plants in Ansan's industrial complex were halted by a power blackout.

"When I was riding a subway train on my way to work, it stopped for over 10 minutes," said Jeong Min-gyu, a passenger of Seoul Subway Line 2. "I was 20 minutes late for work this morning."

Chae In-sook, a 53-year-old citizen, said she had never experienced wind so severe.

"I had to run in the downpour to the subway station in my neighborhood because my umbrella was broken," she said.

Agricultural product damage is also estimated to be astronomical, as owners of rice paddies and pear, grape and apple farms along the west coastal areas reported extensive damage from the strong winds.

Some 100 houses in Seoul reported their windows were damaged, while hundreds of trees and at least 10 utility poles had been knocked down, the agency said, adding the exact sum of property damage has yet to be compiled.

The Seoul Metropolitan Office of Education issued emergency instructions, asking elementary and middle schools in the capital city to delay the beginning of classes by two hours.

In a related measure, all public and private kindergartens were closed for the day.

A total of 128 domestic and international flights were canceled at airports nationwide, the NEMA said.

At least 148 ferry operations from Mokpo in South Jeolla Province to Jeju island were suspended, said the agency.