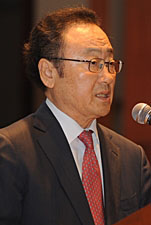 The head of the G-20 Summit organizing committee said yesterday that it may be difficult to reach a consensus on the creation of global financial safety nets and reforms at the International Monetary Fund at the forthcoming meeting in November in Seoul.

Sakong Il said an agreement on these proposals are “directly linked to the allocation of stakes and more contributions made to the IMF, and how the organization can establish emergency credit lines if several countries simultaneously experience sudden liquidity problems.”

He stressed that even if an agreement is not reached in Seoul, the G-20 members could lay the foundation for concluding a deal in the near future.

Sakong, speaking at the Financial Stability Board (FSB), also said the G-20 should focus more on the views and issues of emerging countries to make the group more credible.

Kim Choong-soo, governor of the Bank of Korea (BOK), also underscored the need for measures to ensure sound foreign exchange stability for emerging economies during a financial crisis.

“During the recent global financial crisis, while having not provided any direct causes of the crisis, emerging market countries nevertheless experienced very severe instability in their own financial markets,” he told the forum in its second day of meetings in the run-up to the G-20 Summit.

Korea has proposed to the IMF to boost its Flexible Credit Line program and create additional credit lines to provide foreign currency to emerging countries when a financial crisis erupts.

“This will contribute to global rebalancing, and emerging markets will as a result have much less incentive to accumulate foreign exchange reserves as a form of self-insurance,” he said.