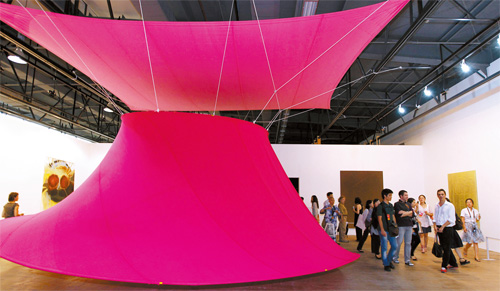 The installation ‘Rote Trombe’ (‘Red Whirlwind’), by the German artist Rupprecht Geiger, is part of the 8th Gwangju Biennale, which kicked off yesterday and continues through Nov. 7. [YONHAP]

GWANGJU - Each of the more than 3,000 small, sepia-toned photographs lining the walls of a room in Gallery 4 at the Gwangju Biennale Hall shows either a child hugging a teddy bear, a group of adults posing with a teddy bear or various other human-bear combinations.

Real teddy bears have a place here, too. They sit in the center of the room, alongside their histories - one bear was with a family that was aboard the Titanic. In “The Teddy Bear Project” by the German collector and curator Ydessa Hendeles, the teddy bear is not just a doll but a kind of idol.

“Gallery 4 looks at religious figures, idols, fetishes and dolls,” said Massimiliano Gioni, director of the 8th Gwangju Biennale. “And the whole exhibition investigates the desire to make images of ourselves and our loved ones.”

The idol theme continues in the next series of rooms, which contain figures that are half doll and half idol. Among them are a group of colorful kokdu, hand-carved wooden figurines that once decorated biers in Korean traditional funerals, collected by Kim Ock-rang.

In another room nearby is a hyper-realistic sculpture of a middle-aged woman entitled “Flea Market Vendor” by American artist Duane Hanson (1925-1996) and “Ushering in Banality” by popular American artist Jeff Koons, which looks like an enlarged version of a cheap statuette.

The biannual show, one of Korea’s biggest regular art events, started yesterday in the southwestern city of Gwangju and continues to Nov. 7

It features photographic, installation and media art works by 134 artists from 31 countries.

The show features some spectacular installation works, such as “Rote Trombe” (“Red Whirlwind”) by German abstract painter and sculptor Rupprecht Geiger (1908-2009) and “Series of Vulnerable Arrangements - Concerns Towards Personal Limits” by Korean installation and video artist Haegue Yang in Gallery 2.

The 100 life-size sculptures of the Rent Collection Courtyard in Gallery 3, which were made by a group of Chinese artists as propaganda pieces during the Chinese Cultural Revolution, are also large and quite imposing.

But small photographs and media art dominate this year’s biennale, and the exhibition spaces have been designed to create a calm and meditative atmosphere. Viewers need to move from one work to another slowly, in order to savor the items in the show.

The title of this year’s binnale is “Maninbo” or “10,000 lives,” which was inspired by a series of poems of the same name by Ko Un.

“Ko Un started his masterpiece - basically a giant collection of word portraits - while he was in prison [for resisting the Chun Doo Hwan military regime] as he tried to remember every single person he had ever met in his life,” Gioni said. “So, 10,000 lives also refers to the power of images to act as sites of remembrance and memorials.”

Just as many contemporary artists use objets trouve, or found objects, Gioni and the other curators placed found photographs and cultural artifacts alongside the work of contemporary artists. They include the kokdu dolls and photos of people about to be executed at Cambodia’s Tuol Sleng prison during the reign of the Khmer Rouge. In particular, photos of a young girl and a mother and child in the Tuol Sleng Prison Photographs series are especially moving.

“The images are incredibly complex from both an aesthetic and ethical point of view. They illustrate how intricate images can be,” Gioni said. “These images have made me realize that if we want to understand how we relate to images, we should not rely solely on artworks, since it is often in fields other than art that new kinds of images are produced and consumed.”

The show also includes photos by Korean photographer Kim Han-yong used in advertisements in the 1960s. The photos are shown without the original text, which creates an atmosphere of ambiguity about what the models - who are wearing heavy makeup and standing in exaggerated poses - are doing or what they might express.

Ultimately, the photos elicit laughs from viewers contemplating models who look like such commodities.

In addition to the biennale’s main venue, exhibitions are also held at the neighboring City Museum, the Folk Museum and outdoors in the alleys of the traditional Yangdong Market.