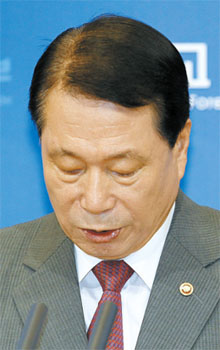 Rumors spread this week that the ministry had bent the rules to provide a job to Yu’s 35-year-old daughter, Hyun-sun, during a recent recruitment process, and the foreign minister met with reporters yesterday and apologized for his indiscretion.

Lee ordered a probe into the scandal, according to a senior Blue House official, as concerns grew that his campaign of building a fair society will be tainted by the incident.

“A minister’s thinking must be extremely strict that some may think he is cold-blooded,” Lee was quoted as saying Thursday.

The official said Lee was briefed about the controversy Thursday night.

The ministry made a public announcement in July to recruit a short-term contract free trade specialist and the decision to hire the minister’s daughter was made Tuesday.

In his meeting with reporters yesterday, Yu Myung-hwan apologized for his indiscretion.

“I was careless about the possibility that my daughter’s employment at the ministry, where the father is the minister, could prompt allegations about favoritism,” Yu said. “My daughter agrees that it is inappropriate working for her father, so she said she will withdraw her acceptance of the job.”

According to Yu, his daughter worked as a trade specialist for three years since 2006.

“She left the job in September last year ahead of her marriage,” Yu said. “She then applied for the one-year contract this time because she wanted to work in the division where she had previously worked for three years. The employment was decided without a test, but she went through an application screening and an interview.”

Allegations about the unfairness of his daughter’s employment spread.

The ministry made the recruitment announcement on July 1, but none of the applicants, including Yu Hyun-sun, were qualified at the time. On July 16, the ministry announced the recruitment plan again, with revised prerequisites for language proficiency and an extended deadline.

During the period, the minister’s daughter fulfilled the English language proficiency requirement and applied for the job, along with five others. The ministry interviewed three of the six, and Yu was selected for the job.

The Democratic Party condemned the foreign minister and the administration, demanding Yu to resign.

“To live up to President Lee’s Liberation Day pledge to build a fair society, Minister Yu must immediately step down,” the DP’s lawmakers on the foreign affairs committee said in a statement. “The Foreign Affairs Ministry is not the family affairs ministry of Yu,” the Democrats said, demanding an investigation of the ministry’s recruitment process.

The DP’s floor leader, Park Jie-won, also attacked the administration over the case.

“Is this really a fair society when the daughter of the foreign minister was given a job through a special selection?” he asked.

The Grand National Party tried to contain the scandal yesterday, as some of its own members joined the move to attack Yu.

“We don’t think the selection process was unfair, but there is a possibility of misunderstanding,” said GNP spokesman Ahn Hyoung-hwan. “A senior public servant must be careful not to cause a misunderstanding.”

“I was told about the foreign minister’s daughter’s job,” he wrote. “A fair society should have been a flag that can touch everyone’s heart. When a flag bearer stands naked, will the people see the flag or the naked body? I lament about Korea’s elite.”

Government sources said yesterday that the Blue House is looking into the scandal as criticism grows. After Lee’s order for an investigation, the Ministry of Public Administration and Security launched a probe, the Blue House said. “I don’t think a decision on Minister Yu’s fate will be made immediately because of this case, because the G-20 Summit in Seoul is coming in two months,” said a Blue House source. But others worry that public criticism may become uncontainable.

“The scandal was enough to deal a critical blow to President Lee’s campaign of a fair society,” he said. “We are carefully watching public opinion, along with the outcome of the probe.”