Picking up the pieces after Kompasu hits region

Picking up the pieces after Kompasu hits region 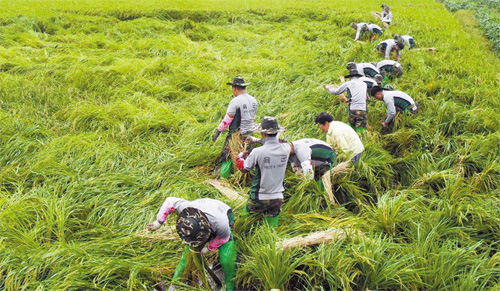 Soldiers in 37th division of the army were mobilized yesterday to raise rice stalks that fell down when Typhoon Kompasu hit Chungju, North Chungcheong. [YONHAP]

While some relief workers removed downed trees, traffic lights and signposts that lay across roads in metropolitan areas, others focused on helping farmers by removing destroyed greenhouses, fruit droppings and rice stalks that were whipped to the ground by the tropical storm.

“We will mobilize every possible administrative means to calculate the total amount of damages incurred by the typhoon and continue emergency recovery operations,” said an official at the emergency management agency.

The Korea Electric Power Corporation managed to restore power to 98 percent of the 1.68 million houses and buildings that had power outages across the country as of yesterday.

The Ministry for Food, Agriculture, Forestry and Fisheries said it will offer natural disaster relief funds for farmers as soon as it finishes calculating the total loss incurred by the typhoon, which includes providing basic living expenses, expenses for rebuilding farming facilities (ranches and vinyl houses) and student loans.

While the North Gyeonggi area was hard hit by the typhoon, the South Chungcheong Provincial Government lamented losing its natural assets.

Strong winds at a speed of 41 meters per second (91 miles per hour) brought by Kompasu Thursday uprooted or destroyed the branches of 7,650 Anmyeon pine trees at forest lodges and arboretums in Anmyeon Island in Taean, South Chungcheong. The South Chungcheong government mobilized some 100 workers to remove fallen trees yesterday.

According to meteorologists, winds of 50 meters per second can destroy a house made of concrete.

Anmyeon pine trees long enjoyed a reputation of being of high quality and they were regarded as one of the most desirable trees to use to build giant ships and traditional palaces.

According to historians and carpenters, both Gyeongbok and Changdeok palace were constructed with Anmyeon trees during the Joseon Dynasty (1392-1910). The trees were also used for rebuilding Namdaemun, which was burned down by an arsonist in January 2008.

South Chungcheong government officials estimate that of the 7,650 trees that were destroyed, 1,750 were more than 50 years old, with an average height of 24 meters (about 79 feet).

“Anmyeon pine trees that are older than 50 years are regarded as the most valuable for lumber uses,” said Choi Yeong-kyu, who heads a forest lodge on Anmyeon Island.

“It’s hard to estimate the total amount of loss incurred by destroyed Anmyeon pine trees at this point,” said Kim Yeong-su, an official at the South Chungcheong Provincial Government’s forest department. “But now it’s clear that it will be difficult for local governments to achieve its plan to transform the forest areas into its best tourist attractions.”

Under the original plan, the South Chungcheong government planned to create a 36 kilometer-long (22 miles) trekking course with views of Anmyeon pine trees and create alcoholic drinks and teas with Anmyeon pine tree resin.