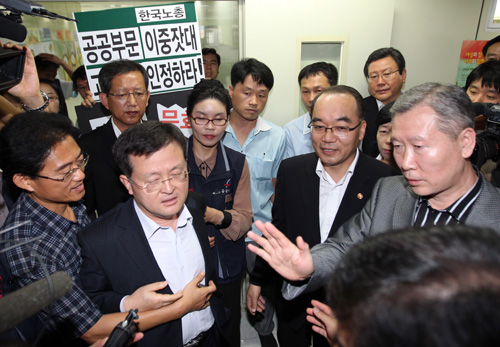 Newly named Minister of Employment and Labor Bahk Jae-wan is blocked by protesters from a workers’ union under the labor ministry after he visited the offices of the Federation of Korean Trade Unions yesterday in Yeouido, Seoul.

The protesters were holding picket signs that criticized the ministry, one accusing the ministry that it “pretends to negotiate on the outside, but demands the reduction of full-time employees behind the curtain.”

Federation president Jang Seok-chun also said during the visit that the government interfered in negotiations with the unions.

The minister, who was on his first visit to the federation headquarters four days after being in office, answered plainly that he would look for “a way to coexist through the opinions of all social standings.”