Huh leads Incheon to draw in first game as manager

Huh leads Incheon to draw in first game as manager 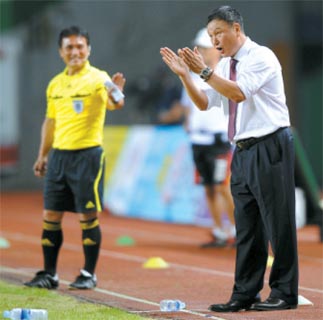 Huh Jung-moo appears in his first match as manager of Incheon United. [NEWSIS]

Former national team manager Huh Jung-moo failed to win his debut match with Incheon United in front of 11,126 fans at Incheon Munhak Stadium, but his club walked away with some positives in its 1-1 draw with Busan I’Park on Saturday.

Incheon United had been riding a five-game losing streak in which they allowed 16 goals. Having lost four games by 3-2 scores, defense was the weakest link for the squad, and it was in glaring need of an upgrade.

The new three-man defensive formation allowed one goal off a set-piece play. In addition, wingers Chun Jae-ho and Lee Jun-young contributed with solid play both ways.

“It’s important to use a system that’s suitable to the personnel on hand,” stated Huh in a post-match interview. “Incheon United are more suited to play a formation featuring three defenders than four.”

Another noticeable change in the Incheon players was their attitude. Playing an aggressive style on offense, Incheon United pressed Busan I’Park with speedy attacks throughout the first half. As a result, Busan did not connect on a single shot in the entire first half.

“Huh has made improvements to the Incheon United squad in a short span of time,” stated Busan manager Hwang Sun-hong. “I’m just glad we were fortunate enough to face Incheon today rather than later in the season.”

In an effort to provide fans with some excitement, Huh not only had his players play attack-minded football, but also discouraged them from wasting time.

“Did you notice any of our players rolling around the pitch after a tackle to take up time?” stated Huh. “I emphasized to my players that we needed to cut down on such actions for the fans.”

With the tie, Incheon improved its record to six wins, two draws and 10 losses for 11th place in the 15-team league.

In other games around the league, the Suwon Bluewings continued their strong surge by defeating Gangwon FC 2-1. With the win, Suwon bumped Ulsan to take the sixth and final playoff spot in league standings.