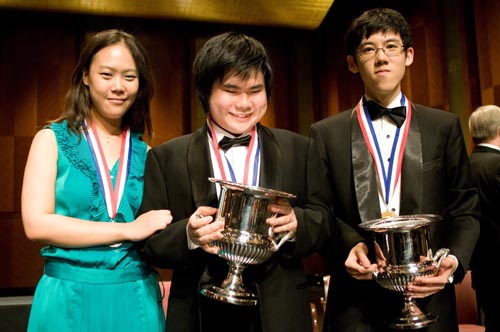 
This isn’t “American Idol.” It’s more like “Global Idols at the Ivories,” a glorious mix of virtuosity and great music documenting 29 young pianists in their drive to win the Van Cliburn International Piano Competition.

The outcome of this 90-minute film, which aired on PBS this week, is hardly a secret, despite its coy title, “A Surprise in Texas.”

The contest, closely followed in classical music circles every four years, took place in May 2009.

But there will be no spoilers here. To approach the film unaware of who will win makes it even more delightful (although no viewer could resist feeling keyed up as those 29 players are narrowed to 12, then six, before the judges’ final verdict).

The competition, unfolding over three weeks in Fort Worth, Texas, is captured in the film as a blend of its participants (representing 14 countries), the music they play, the jurors who measure their performances, and even the Texas hospitality of the host families that put them up.

At stake is the most prestigious prize in the piano world. The stakes are high and, with this level of talent, the bar is even higher.

“When you have this clear understanding that you are blessed with talent that not many people around you have, then it’s a not very comfortable life,” says Eduard Kunz, a passionate young Russian. “It’s not happiness at all.”

But most of the contestants seem spared from that grade of torment.

Di Wu, who comes from China, says that when she performs a demanding, even unforgiving masterpiece, “I still like to preserve what’s original in me, I guess,” and chuckles.

A clear favorite from the start is Nobuyuki Tsujii, who has been blind since his birth in China.

He chooses a Beethoven sonata for one of his performances.

“Knowing that Beethoven overcame his own difficulties, becoming deaf, I felt that I could relate to some of that,” he explains through a translator.

The competition, first held in 1962, honors pianist Van Cliburn. He’s the musical genius who, in the deep freeze of the Cold War four years earlier, had won the first Tchaikovsky International Piano Competition in Moscow. He wowed the Soviets, gained worldwide celebrity and returned home a national hero of rock-star proportions. The lanky, fresh-faced Texas lad was just 23.

In “A Surprise in Texas,” Cliburn’s glow seems to infuse this new generation of musicians, but he is barely seen: only at the end, declaring the winners.

And, please note, he is not and has never been on the judging panel. “Oh, no, no,” he said with a disarming laugh during a recent phone interview. “I get too personally involved. I know what each person is going through. I couldn’t. That would just kill me.”