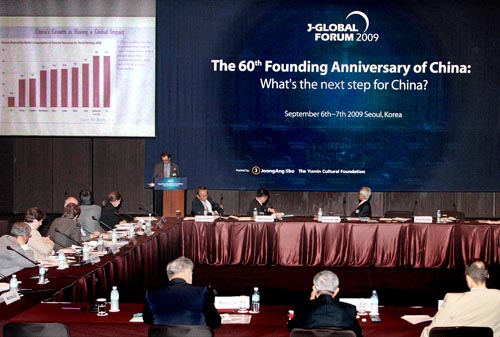 The JoongAng Global Forum was held at Shilla Hotel focusing on China’s role for the prosperity of Northeast Asia on Sept. 7, 2009. With 150 notable guests from home and abroad participating in this year’s event, the forum kicks off today at the Shilla Hotel with the theme: “New Dynamism in Asia: Will Asia Be the Center of the New Global Politics.” [JoongAng Ilbo]


People disliked the confrontation between the Soviets and the U.S. during the Cold War. Thus they hate the deterrence strategy that developed. Most people have forgotten that the peace between the U.S. and the Soviets was based on a strategy of mutual assured destruction (MAD). MAD is not a nice way to maintain peace but we have not developed a more effective strategy to replace it in East Asia. 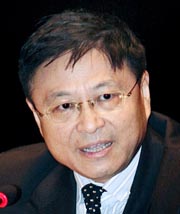 China-U.S. security conflicts will become intensive in the next two years. Obama is a political leader good at promising cooperation but weak in implementing his policy. As the Pentagon becomes more suspicious of Chinese military modernization, Obama’s policy toward China will become tougher for the sake of winning support from the Pentagon.

In the next two years, China and the U.S. will witness more conflicting interests rather than common interests in security fields.

Most of the East Asia nations will possibly regard the increasing conflicts between China and the U.S. as opportunities rather than dangers. They may take advantage of the security conflicts to advance their security interests, as Vietnam did regarding the South China Sea. The more advantage other East Asia states take, the more regional security conflicts we are going to witness.

The solution is to set up a new regional security architecture based on China-U.S. preventative cooperation.

It is beyond the individual capability of China or the U.S. to reduce security conflicts substantially in East Asia. It requires collective efforts. But now there is no mechanism to guarantee regional security mainly because there is no effective leadership. For the sake of establishing an efficient security architecture for East Asia we need a joint leadership by China and the U.S. Unfortunately, the U.S., its alliance and Asean countries are rejecting this idea. Most East Asian countries worry about China-U.S. joint domination in regional security and want to keep the advantage of China-U.S. security conflicts for the sake of advancing their political or security interests.

In the foreseeable future, most East Asia countries will prefer to see a conflicting, rather than a cooperative, relationship between China and the U.S. Meanwhile they hope to have fewer conflicts with neighbors. It’s difficult for these two things to exist side by side. In brief, a policy of pretending to be friends may temporarily cover security diversity, but it will create more conflicts in this region.

*The speaker is Director of the Institute of International Studies, Tsinghua University.