What comes after affluence?

What comes after affluence? 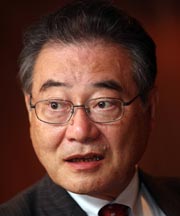 After the Meiji Restoration, the Japanese people worked diligently, day in and day out, under the banner of “promoting new industry.” Over the generations, they succeeded in raising Japan to the position of the world’s second leading economic power. They truly toiled day and night, at times being ridiculed as “economic animals.” When the countries of Europe, thought to have been left behind, appeared to be catching up again, the Japanese grew frantic in an attempt to pull away further. As this battle was waged, however, there was a constant doubt lurking in the minds of the Japanese. That question was, and is, “What comes next?”

Within globalization, the Japanese made considerable sacrifices in terms of their families and local communities. When I think of individuals cut off from their families and communities, a certain metaphor comes to mind. It is as if countless thousands of balloons, each with its strings having been cut, are adrift in the air, about five meters above ground. In South Korea, we read of an increase in suicides. There has been a particularly sharp rise in the number of children taking their own lives. According to statistics for 2008, the suicide rate in Korea was 26 persons per 100,000 population. This is roughly the same as Japan, where the rate was 25.8 persons for the same year. What meaning exists in being an economically developed country that, in the process of its growth, has destroyed the lifestyle of dwelling in harmony with Mother Nature? Aren’t people finding themselves unable to tolerate such conditions?

What is the next level of affluence - the one that comes after attainment of economic prosperity? In this sense, both Japan and Korea are currently agonizing over a historical challenge that no other country has ever experienced. There are no precedents or models to turn to. We must deal with these agonies the best we can, and uncover our own answers in the process. Clearly, China, India and other countries will experience this same anguish, these same struggles, in time. Following them will be Thailand, Vietnam and other developing nations.

In my view, it is the duty of Japan and Korea to act as role models in conveying to our friends throughout Asia the nature of these agonies. We must share with them the processes of solution, and the mental development involved in the struggle. Of course, there is no single answer. Each country must define standards of affluence to match its own situation and needs. Discussions must emerge in the context of the light and the darkness, the joys and the pains, inevitably created by economic development. Those debates will, hopefully, lead to the discovery of common qualities shared throughout Asia, with people questing for true affluence. At that point, those qualities will emerge as the new global standard for prosperity. In that capacity, they will come to exert a critical influence on our immediate neighbors, as well as on Europe, the Americas and Africa. It is at that time, therefore, that Asia will assume the role not only as the hub of economic activity, but also as the center of global politics.

On a related front, one distinguishing trait of Asia is the broadmindedness to recognize the gods of different religions. In the distant past, the civilization of ironware that blossomed in the Near and Middle East cut down lush forests to make the charcoal used in iron manufacturing. That civilization died out in an extremely short period of time. Emerging in the wake of such natural destruction was the worldview of monotheism, in which the sun was worshipped as the only deity, as well as the beliefs of Judaism, Christianity and Islam. Over the centuries, the concepts of modern rationalism and globalization were effectively established on the basis of these religious foundations. Setting aside the pros and cons of such developments, Asia possesses the ability to travel down a different road. I am referring to the pursuit of a higher caliber of prosperity, above that of economic affluence, while recognizing the great diversity of values existing among us. Asia, in other words, has the “power” to advance economic development and regional harmony on a simultaneous basis, empowering people to live in genuine harmony with Mother Nature. This, I feel, is the key to Asia truly emerging as the world focus.

*The speaker is a member of LDP, Japan.