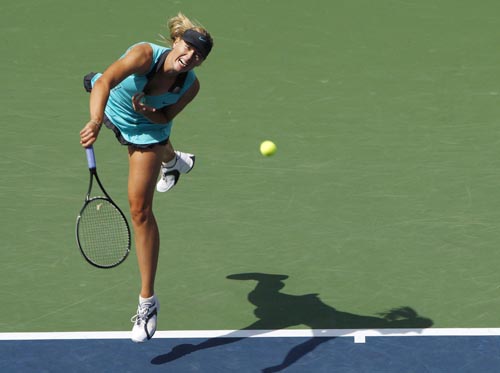 Maria Sharapova of Russia serves during her match against Beatrice Capra of the U.S. at the US Open tennis tournament in New York on Sept. 4. [REUTERS/YONHAP]


NEW YORK - Maria Sharapova and Caroline Wozniacki blew their opponents off the court on Saturday at a windy Flushing Meadows set up a dream fourth-round meeting at the U.S. Open.

The pair showed no mercy against their lower-ranked rivals and each romped to victory in 73 minutes after near gale force winds produced some farcical moments at the last grand slam of the season.

Sharapova was aced by American Beatrice Capra when she took an undignified swing at a ball that was swept out of her reach by a gust of wind while Wozniacki was gifted a winner after a seemingly harmless forehand bounced and was blown over the head of the perfectly-positioned Chan Yung-Jan and into the stands.

Serving was a lottery with players often forced to re-toss the ball while umbrellas, towels and litter blew onto the court and forced several points to be replayed.

For most of the top players, the blustery conditions made no difference to their results and Roger Federer, Novak Djokovic and Robin Soderling all won in straight sets.

The lone major casualty was Serbia’s Jelena Jankovic, a finalist in New York two years ago and the fourth seed this time. She was beaten 6-2 7-6 by Kaia Kanepi of Estonia after copping the worst of the conditions. On one of her serves, Jankovic only managed to catch the ball with the frame of her racket.

“I had a really hard time hitting the balls,” said Jankovic, the highest-seeded player beaten at Flushing Meadows this year.

“You hit the ball one direction, it goes another. You’re just getting ready to hit the ball and it just moves away from you.”

Even Federer struggled to cope with the conditions but the experience of winning 16 grand slams has taught him how to overcome every situation and he easily won his center court match with Frenchman Paul-Henri Mathieu 6-4 6-3 6-3.

“I kind of felt comfortable,” the Swiss world number two said. “I knew what I could do and what I couldn’t do.”

Sharapova was at her most ruthless in her 6-0 6-0 whitewash over American teenage wildcard Beatrice Capra. The Russian was upset by local teenager Melanie Oudin in New York last year but made sure there was no repeat this time as she moved into the last 16 for the first time since she won the championship four years ago.

“This was a new day. What happened last year, I didn’t really want to go into the match thinking about it,” Sharapova said.

“On a day like today, I just wanted to make sure I was consistent and did the right thing, maybe didn’t go for the lines as much and just played smart tennis.”

Wozniacki dropped her opening service game against Chan but that was her only hiccup in a 6-1 6-0 win over her Taiwanese opponent. A finalist at Flushing Meadows 12 months ago and the top seed this year after injury forced Serena Williams to sit out, the Dane has only dropped three games in the tournament.

“I think I’ve shown I belong where I am,” she said.

“I’m just happy to be through to the fourth round. For me, it’s just about winning the matches.”

After a slow start to the tournament, Djokovic and Soderling are both rapidly gaining momentum.

Djokovic had few problems seeing off American James Blake 6-1 7-6 6-3 in the featured night match while the big-serving Soderling was also untroubled by the conditions, cruising to a 6-2 6-3 6-3 win against Dutchman Thiemo de Bakker.

Djokovic’s next opponent is American Mardy Fish, who made his way through to the round of 16 the hard way, wearing down Frenchman Arnaud Clement 4-6 6-3 6-4 1-6 6-3, while Soderling plays Spain’s Montanes ahead of a possible quarter-final with Federer.

“Everybody has been telling me since the draw came out that I’m going against Roger in the quarters,” said Soderling. “I still have to win one more match so it’s still far ahead.