Plenty of fish to fry

Plenty of fish to fry 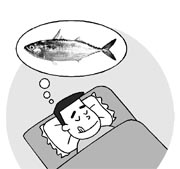 Mackerel, a cheap but highly nourishing fish, is so popular in Korea that it frequently appears in pop songs and poetry.

In the song “Mother and Mackerel,” singer-songwriter Kim Chang-wan says that the true meaning of motherly love is when a son finds a mackerel in the refrigerator that his mother has salted for him before going to bed. In their song “Mackerel,” the duo Nora Jo describes a preference for mackerel over other fish, such as tuna and hairtail, saying it is “a beautiful fish that has DHA for my love.”

There are many examples in literature, too.

Writer Kang Jeong makes an epicurean love connection in the poem “Mackerel Lover,” where he reminisces about the smile on his girlfriend’s face as the two gazed at one another over a mouth-watering piece of mackerel.

Heo Yeong-man, a famous cartoonist, said in his comic book “Houseguest” that lightly-salted mackerel tasted so good he wanted “to devour the whole thing, down to the tail.”

It is said that the Korean name of the fish - godeungeo, or high-backed fish - comes from its shape. “Dongguk Yeojiseunglam,” a geography book published during the reign of King Seongjong, referred to mackerel as godoeo, or old sword fish, after its sword-like shape.

Nowadays, mackerel is a popular fish that can be bought by anyone. But when Korea was under Japanese occupation, it was an expensive fish that the only the Japanese could afford.

In Japan, it is called saba. The Japanese expression, “saba-saba,” which means “to bribe an official,” is often said to have originated from this fish. One theory is that the term was created after the practice of giving saba to officials when people wanted to buy them off. Another theory is that the expression comes from the expression “sabaouomu,” which means “profiteering by shortchanging someone,” because fishmongers shortchanged people when they sold saba at the fish market.

Of course, these are nothing but theories.

As mackerel has been popular for a long time, price fluctuations are of great interest to most people.

When it was reported a few days ago that the price of mackerel caught in nearby seas had gone up to 9,900 won per fish, it became the talk of the town.

I sincerely hope commodities prices flatten out soon and the price of tasty autumn mackerel goes down so that people can call it a “beautiful fish” once again. Only then will people be able to sleep soundly with the idea that they can enjoy a roasted mackerel the next morning.