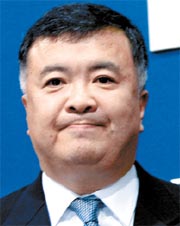 A former senior prosecutor who led an investigation into a bribery scandal involving former President Roh Moo-hyun has suggested the existence of a slush fund as earlier claimed by a senior police official.

Cho Hyun-oh, the new National Police Agency Commissioner, caused controversy last month when it was revealed that he had earlier told police colleagues in a public lecture that the late president had controlled a secret slush fund.

Cho’s claims were hotly debated and National Assembly lawmakers demanded Lee In-kyu, who headed the bribery investigation into the Roh family, and other prosecutors should appear at Cho’s confirmation hearing as witnesses. However, Lee and other prosecution officials did not attend.

In two separate private conversations given on Aug. 9 and Sept. 1 with the JoongAng Sunday, Lee, a former chief of the Central Investigation Department at the Supreme Public Prosecutors’ Office, said he didn’t appear for the hearing because his presence was not wanted by “both opposition and ruling party lawmakers.”

Although Lee, now an attorney with law firm Barun, asked the JoongAng Sunday not to publish the conversation, the paper yesterday released some excerpts “in the public’s interest.”

“It’s not necessarily right to say there was a slush fund under ‘borrowed-name’ bank accounts, but [Cho’s argument] isn’t false when [prosecutors] discovered some money,” Lee said. “I’m not sure where Cho heard the story about [Roh’s hidden slush fund].”

Lee also argued that a current opposition Democratic Party lawmaker pocketed at least $10,000 from former Taekwang Industrial Chairman Park Yeon-cha, who was at the center of the bribery scandal allegedly involving the president’s family.

“I can guarantee this,” Lee said. “But the prosecution didn’t investigate this matter because the allegations didn’t constitute a crime based on various circumstances. I can say there are lots of people who have survived [politically] as a result of the death of President Roh Moo-hyun.”

President Roh, the predecessor to President Lee Myung-bak, committed suicide by jumping off a cliff near his residence on May 23, 2009, amid the prosecution investigation into bribery allegations involving his family.

The ruling party yesterday called for an investigation into Lee’s claims about an opposition lawmaker taking money from Park, while the Democratic Party denied the existence of Roh’s “borrowed-name” accounts and said Lee’s comments were inappropriate.