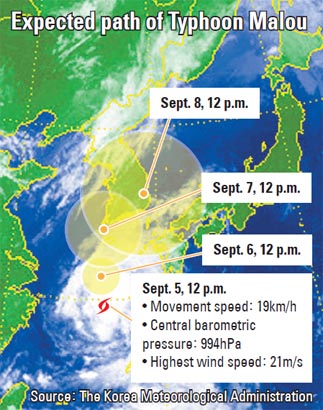 Weather forecasters yesterday warned that another typhoon was heading for Korea less than a week after the country’s west coast was hit by one of the biggest storms in years.

Typhoon Malou could bring strong winds and high waves off the country’s south coast after it passed Okinawa of Japan. Malou, the Mandarin word for agate quartz, is heading for Jeju Island at 22 kilometers (13.6 miles) per hour and would affect areas within 250 kilometers of its radius.

The approach of the typhoon forced Korea and the U.S. to postpone their joint anti-submarine drill in the Yellow Sea that was scheduled to start yesterday. The naval exercise was part of defense preparations in response to the sinking of the Cheonan in March.

The Korea Meteorological Administration said the typhoon is not as big as Typhoon Kompasu that hit Korea last week, but it could grow in size as it passes over warm water. Its maximum wind speed is measured at 21 meters (69 feet) per second.

Forecasters expect the storm will approach Seogwipo on Jeju by Tuesday. But its path is highly unpredictable, and there is a chance it could land on the Korean mainland late Tuesday or early Wednesday, the KMA said.

“The typhoon’s progressing route is highly changeable depending on the expansion and contraction of the high atmospheric pressure in the northern Pacific, but our observations indicate a high chance of the typhoon landing on the Korean Peninsula,” a weather official said.

Typhoon Malou was already having an effect on the peninsula, with heavy rain in the Seoul region and elsewhere yesterday.

The National Emergency Management Agency is currently making a last-ditch effort to clean up damages caused by Typhoon Kompasu before Typhoon Malou arrives. The efforts include saving agricultural crops damaged by the typhoon and the restoration of electricity in some areas.