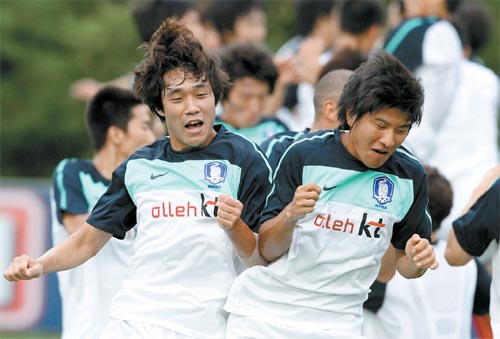 Park Chu-young, left, and Park Joo-ho participate in a training session at the National Football Center in Paju, Gyeonggi on Sunday. By Lim Hyun-dong


Opting for a roster short on forwards, national team manager Cho Kwang-rae is set to use midfielders Lee Chung-yong and Park Ji-sung prominently on the offensive side of the ball.

Cho’s latest experiment with the team’s lineup will come against a lower-ranked but strong Iranian squad tonight during an 8 p.m. match at Seoul World Cup Stadium.

The manager will likely unveil a 3-4-2-1 formation tonight with Park Chu-young as the lone forward and Park Ji-sung and Lee Chung-yong providing support up front. Cho has said he plans on using right-winger Lee as a forward at times, shifting him to the front in certain situations to partner with Park Chu-young.

“I felt that one type of offense would not be sufficient in our preparation for the Asian Cup, so I decided to test out another form in our friendly match against Iran,” Cho said. “It will be more suitable to use Lee Chung-yong on the right side of the field trailing Park Chu-young, while Park Ji-sung will be required to frequently join in on the attack from the midfield.” 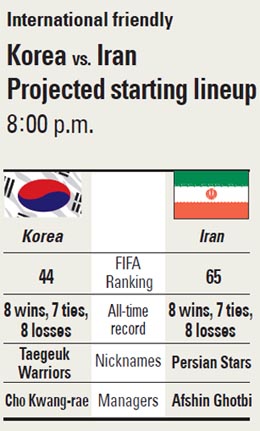 Cho opted to select Park Chu-young and Seok Hyun-joon as his only two forwards for tonight’s match, forgoing players like Lee Keun-ho, Ji Dong-won and Lee Seung-yeol who were on the roster for his managerial debut against Nigeria on Aug. 11 in Suwon.

“To be honest, I didn’t find any forwards I felt could live up to my expectations,” Cho said during a press conference at the National Football Center on Sunday. “I thought about selecting Yeom Ki-hun, but he is currently recovering from an injury.”

With the 2011 Asian Cup in Qatar coming up in January, manager Cho has tonight’s friendly against Iran and one final tune-up against archrival Japan on Oct. 12 to prepare for the tournament. The outcome of the match against Iran - Cho’s second game as manager of the national team - isn’t as important as testing out the club’s strategy and seeing how the players fare against a bigger and stronger Iranian squad.

Both Park Ji-sung and Cho reiterated the importance of winning the Asian Cup, which would allow the team to stake its claim as the top football squad in the region.

“It’s not as big as the World Cup and tournaments in Europe,” Park Ji-sung said. “But it’s the biggest of its kind in Asia, and as such it’s an important tournament.”

Manager Cho said his top near-term target is winning the Asian Cup and successfully transitioning into a team with “new and younger” players on the roster.

As for tonight’s match, captain Park Ji-sung and the Taegeuk Warriors are confident about their chances against the Persian Stars. 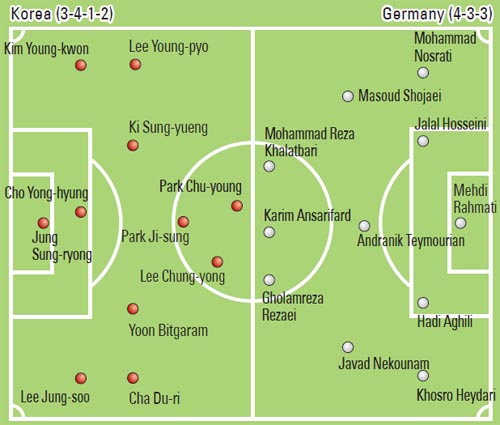 “We will gain some confidence playing Iran in this friendly match,” Park said on Sunday in an interview with press at the National Football Center in Paju, Gyeonggi. “Iran is one of the top squads in the region. The team boasts good size, and with many of its players having overseas experience, it plays a brand of football similar to the one played in Europe. This will be a great game for us to prepare for the 2011 Asian Cup.”

Iran is coming off a convincing 2-0 win over China in a friendly held in Zhengzhou, China, on Saturday. Iran used Gholamreza Rezaei, Reza Khalatbari and Mohammad Gholami up top. The trio of forwards was successful in pressuring the Chinese defenders, and Gholami scored the second goal of the match off a take-away in the Chinese defensive zone.

Iranian manager Afshin Ghotbi served as the Korean national team video analyst under Guus Hiddink, then as an assistant coach under Dick Advocaat and Pim Verbeek. Having worked in Korea from 2000 to 2007, Ghotbi has a wealth of knowledge about Korean football.

Iran does have a weakness: foot speed. Right fullback Khosro Heydari was especially prone to giving opposing forwards opportunities throughout the game. Iran has looked a step slow in its transition game, failing to get back into position after set-piece plays and when it switches to defense. In all-time matchups, the two sides are deadlocked at eight wins and seven ties apiece.