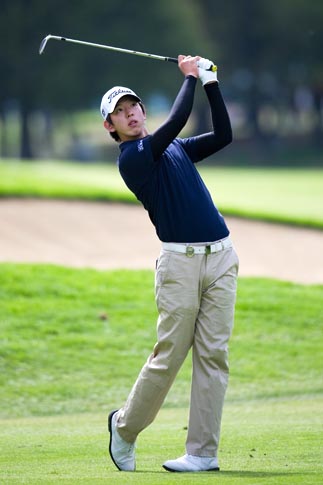 CRANS-MONTANA, Switzerland - Teenage Korean star Noh Seung-yul came in an impressive fourth place at the European Masters on Sunday to improve his shot at taking the Asian Tour’s Order of Merit title.

The 19-year-old carded a four-under-par 67 at the Crans-sur-Sierre Golf Club for a 13-under-par 271 total, eight shots behind Miguel Angel Jimenez of Spain.

Noh, who impressed Australian legend Greg Norman after playing alongside him in the first two rounds, shot seven birdies to his three bogeys and finished four shots ahead of second-ranked Marcus Fraser of Australia, who tied for 16th place in the event co-sanctioned by the Asian Tour and European Tour.

“I’m really happy that I could manage to score this week. I played nicely and I’m glad I put up some good scores to finish in the top five. I feel much better now knowing that I’ve got a bit of a lead over Marcus after this week,” said Noh.

Noh, winner of the Malaysian Open in March, will head to the Netherlands before returning to Korea for a week-long break.

He will then resume his chase for the prestigious Merit title at the Asia-Pacific Open in Japan.

Fraser is also bidding to become the first Australian to win the Asian Tour’s No. 1 spot. The golfer will head to Asia for five events in the coming months.

It promises to be an intriguing battle, as Noh is aiming to become the youngest player in history to become Asia’s No. 1. But the young phenomenon knows that the big-money events at the end of the season can quickly turn things around.

“I still have a lot of work to do,” Noh said. “After winning in Malaysia, it opened the door for me to Europe. The courses are difficult and different to Asia. So I’ve got a lot of experience playing with good players here as well. I feel my game has come up.”