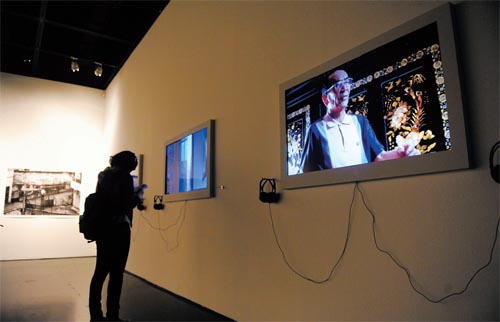 A visitor to the press opening of Media City Seoul, formerly known as the Seoul International Media Art Biennale, looks at ‘Sindoan,’ a video by Korean artist Park Chan-kyong, at the Seoul Museum of Art on Jeongdong street near Deoksu Palace in central Seoul yesterday. [NEWSIS]


Enter the Seoul Museum of Art on Jeong-dong street in central Seoul today and you will encounter ticket-takers who read you a headline from one of the day’s newspapers. No matter what your reaction, it’s all part of the work “This is New” by Berlin-based artist Tino Sehgal.

Sehgal’s exhibit is the first that visitors to Media City Seoul will see when they enter the museum. The media art show, formerly known as the Seoul International Media Art Biennale, begins today with the theme “trust.”

Clara Kim, one of the curators of the show said at a press conference yesterday the “media” in the show refers not only to artwork that uses new technology, such as LED (light-emitting diode) displays and cell phones but also relatively old media like photographs, newspapers and even human voices like those in Sehgal’s work.

Most of the exhibits on the first floor of the museum deal with social and political issues, and have serious undertones.

One of these is the documentary film “Beijing” by New York-based painter and media artist Sarah Morris. It is about the 2008 Beijing Summer Olympic Games and its underlying impact.

“Targeted Killing,” by Tel Aviv-based artist Miki Kratsman, is a disturbing series of photos of ordinary people in Palestinian refugee towns, as seen from afar. The photos were taken with a special lens usually used by the unmanned aerial vehicles of the Israel Defense Forces. The devices were allegedly used to assassinate anti-Israeli forces. 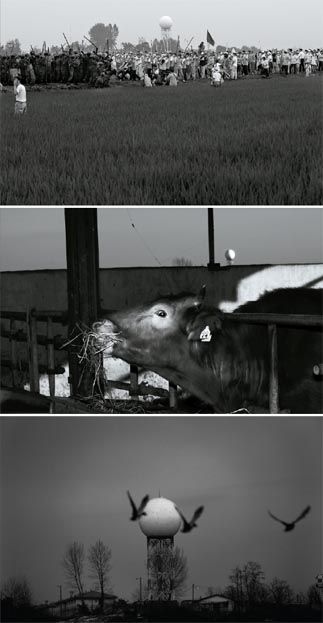 “The strAnge ball” (2004-2007), a series of photos by Korean artist Noh Suntag, is one of the exhibits at Media City Seoul. Provided by the organizers

One of the most impressive works on the first floor is a series of black and white photos called “The strAnge ball,” by Noh Suntag. It shows various scenes of Daechuri in Pyeongtaek, Gyeonggi, where residents have been protesting the expansion of a large U.S. army base. Each of the scenes contains a white ball; sometimes it looms large in the center of the scene and sometimes it is barely seen, like a moon over a farmhouse wall.

The “ball” is actually a radome (a portmanteau of the words radar and dome) from the U.S. army base. A radome protects the internal antenna from the elements.

“The object represents the U.S., which gets what it wants by seizing control of the Korean Peninsula’s security and information,” Noh told reporters last month.

The museum’s second and third floors contain lighter works, like a series of media art and installation pieces by Xijing Men, a group of three artists from Korea, China and Japan. The works, which include a mockumentary and an animated film, are about the history, politics, economy and culture of an imaginary city called Xijing. The city and its problems are portrayed as a kind of new utopia in humorous yet serious tones.

“Bright Dove Hyunsook,” a film by Korean artist Yangachi, also has some humorous elements. In the film, an actress wearing a helmet on which a dove is perched walks and dances on the rooftop of the Seoul Museum of Art.

One of the most impressive works on the third floor is “Singing Cloud” by Shilpa Gupta.

It consists of a large number of microphones assembled in the form of a big cloud that is hanging in the center of the room. Multiple voices float from this or that part of the cloud, sometimes simultaneously and sometimes in turn, making it seem as though the sound is flowing over the cloud’s surface.

According to the museum, Singing Cloud is the outcome of the artist’s collaboration with Mahzarin Banaji, a professor of psychology at Harvard University. The two investigated the process of how images are seen in the individual and collective unconscious.

There is also a spectacular piece of video art called “Who Am We?: Uni-Face,” by the New York-based artist Do Ho Suh.

In this video, the faces of people of various races from multiple cities including Seoul, London and Tokyo are layered one over the other, constantly morphing into a single face.

The Seoul Museum of Art is not the only venue for Media City Seoul. The nearby Simpson Memorial Hall at Ewha Girls’ High School has been transformed into the “Herstory Museum” by the Korean artist Cho Duck-hyun.

“Simpson Memorial Hall, built in 1915, has played an important role in the education of Korean women,” Cho told reporters last month. “I emptied the hall and then let the voices of a hundred women telling their stories, recorded by my assistants, resonate in the empty space. It becomes an intangible museum for ‘herstory,’ instead of a ‘history’ constructed by a male-oriented ideology.”

In addition, the Seoul Museum of Art’s Gyeonghui Palace Annex is showing “Primitive Project,” a work by the Thai film director Apichatpong Weerasethakul, who won the Palme d’Or at this year’s Cannes Film Festival. This is a multiplatform work consisting of video projections, photographs, sculptures and synchronized sounds. It tells the story of the sleepy village of Nabua in northeastern Thailand, which has a horrible history.

The adjacent Seoul Museum of History is also showing works for Media City.

Most them are films that are between five minutes to more than one hour in length.