Sarah Morris focuses on things that can be undone

Sarah Morris focuses on things that can be undone 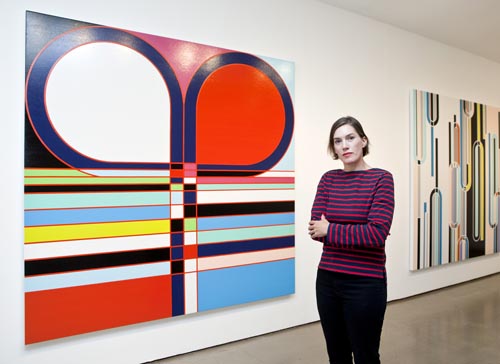 Sarah Morris poses in front of her painting ‘Cats Paw (Knots)’ at Gallery Hyundai in Samcheong-dong, central Seoul. Provided by the gallery


British-American painter and filmmaker Sarah Morris is having a busy month in Seoul. She is showing her film “Beijing” at the Media City Seoul biennale, which starts today. She also has a solo show at Gallery Hyundai in Samcheong-dong, central Seoul.

The exhibition, “Clips, Knots, and 1972,” features the film “1972,” along with paintings depicting paper clips and knots in abstract forms and vivid colors.

The two Morris films depict events at two very different Olympics. The film in this show focuses on the 1972 Munich Summer Olympics, which ended in catastrophe when 11 members of the Israeli team were taken hostage and killed by Palestinian gunmen.

Morris said in a press conference at the gallery on Wednesday that she is interested in exploring events behind the Olympics that are “extreme capitalist spectacles.”

That the Olympics are held in what she described as “serial and city-specific” forms also attracted her attention, she said.

Morris said she has long been interested in the characteristics of cities, especially architecture and its relationship to the city’s psychology, bureaucracy and power structure.

Morris is most well known for a series of abstract paintings that depict urban metropolises as brightly colored grids and are based on the facades of the buildings therein.

The paintings of paper clips and knots, and the film 1972 show the inevitability of failure, even for things that are planned, Morris said.

“Knots and clips can easily be undone, just as bureaucratic forms can,” she said.

*The Gallery Hyundai exhibit runs until Sept. 26. The gallery is open from 10 a.m. to 6 p.m. Tuesdays to Sundays and closed on Mondays. Go to Anguk Station, line No. 3, exit 1, and walk for about 10 minutes. For details, visit www.galleryhyundai.com.