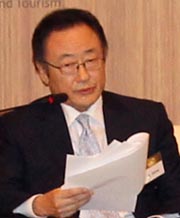 Calling the November summit of the leaders of the world’s 20 largest economies “a litmus test for the Group of 20’s viability and credibility as the premier global economic forum,” Sakong Il, chairman of the presidential committee for the G-20 summit, vowed to make the meeting a success, urging global support for the country’s efforts.

Sakong addressed scholars, journalists and other guests at the J-Global Forum yesterday, during a special session devoted to the G-20 and Asia. In his speech, titled “G-20 from the Asian Perspective,” he stressed the importance of the forum’s role in dealing with the global economic crisis.

“With the global policy efforts led primarily by the G-20, the global economy was able to avoid another Great Depression, although some say that we are in a Great Recession,” he said, adding that the G-20 has come up with “deliverable measures” that distinguish it from other similar forums.

While there is no doubt about the G-20’s role in mitigating the crisis, there is lingering skepticism about the group’s future as the sense of urgency fades, he said.

Korea is hosting the November summit at a critical juncture, and the “G-20 leaders have to show the skeptics that their concerns are unwarranted by making the Seoul summit a success,” Sakong said.

Later, he said that the success of the summit is explicitly linked to the tasks that the member countries have pledged to complete by the meeting in November and he urged the G-20 leaders to prove that their pledges were “more than words.”

Completing the International Monetary Funds’ reform quota by the time of the Seoul summit is one example of a goal that can be met, Sakong said.

“It wasn’t an easy agreement but it is still relatively easier than actual implementation,” he said. “Europeans may have to give up more than other countries do. But we have to show the world that we can do this and that we are working hard for it.”

Noting that Korea is the first Asian - and non-Group of Seven nation - to host the summit, Sakong also said that the outcome of the Seoul summit will inevitably affect Asia’s global leadership role, and urged the six Asian member countries to work together to make the summit a success.

Stressing the view that Asia is on its way to becoming the largest economic region in the world, surpassing the G-7 by the end of the next decade, Sakong emphasized that Asia’s rise in status comes with new responsibilities.

He advised Asian nations to engage more actively in establishing a new global economic and financial system for strong, sustainable and balanced growth, since the region’s economies are highly integrated into the global economy and heavily dependent on external demands. He also urged Asia to more actively engage in righting global macroeconomic imbalances and closing the gap between advanced and developing economies.

Promoting the development agenda at the Seoul summit, Sakong also stressed the importance of another Korea initiative - strengthening the global financial safety net.

A mechanism such as this could benefit emerging economies as they deal with volatile global capital flows, he said, and it should be supplemented by cooperative regional financial mechanisms.

“I would like to see regional facilities actively engage in surveillance and early warning exercises for the region, not to compete with but to complement the IMF,” he said.

Participants at the J-Global Forum also discussed the link between the rise of Asia and the G-20.

“The Seoul summit is where issues critical for East Asia, such as structural reforms, should be taken up,” said Jusuf Wanandi, vice chairman of the Center for Strategic and International Studies.

Mikio Sugeno, senior staff writer of NIKKEI, said: “Asia is rising, but Asia is also aging in terms of population.

Sugeno also asked if the issue would be addressed at the Seoul summit in relation to the goal of sustainable growth.

“Aging is a problem, particularly in this part of the world,” Sakong said. “It requires a new philosophy, a new immigration policy. If the G-20 continues, many new issues will be introduced. As of now, however, the G-20 is focused on overcoming the current crisis.”