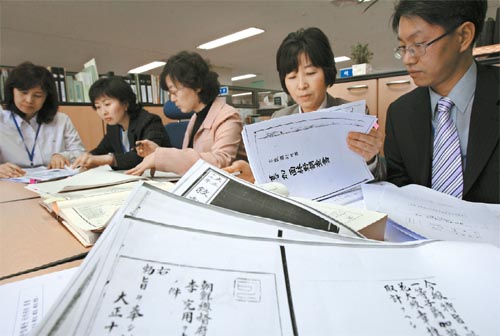 Members of the Investigative Commission look through a pile of documents to trace the financial history of pro-Japanese collaborators. [JoongAng DB]


Decades after Korea broke free from Japan’s colonial grip, the nation is only now coming to terms with profiteers of imperialism, as the Investigative Commission on Pro-Japanese Collaborators’ Property recently wrapped up its work.

The division of the Korean Peninsula, then the Korean War of 1950-1953 put off the matter, to be sure. But after the war effectively ended in a stalemate, South Korean leaders put economic expansion as a top propriety, pushing aside any hope of bringing to justice those who profited from Japan’s 1910 annexation.

Not much changed in that regard throughout the decades. Pro-Japan collaborators that had made money hand over fist were mostly left alone.

The Investigative Commission on Pro-Japanese Collaborators’ Property was established in 2006 to change that. In its four-year term, the commission confiscated 9,645 square meters (103,818 square feet) of land and real estate - 1.3 times the size of Yeouido, Seoul - from 168 descendants of pro-Japanese collaborators. The commission completed its investigation in July and has been officially dismissed.

Barriers were immense. Because of the length of time that had passed, a lot of property acquired during the annexation period had been traded or liquidated over the years, which made it difficult to track.

“Some of [the collaborators] just sold the property or any tangible assets, started businesses with those funds, or made investments. In these cases, it is usually impossible to track the history of the funds,” said Cho Se-youl, secretary general of the Institute for Research in Collaborationist Activities and a member of the investigative commission. 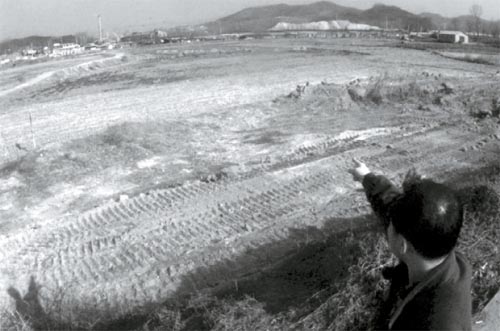 
From the onset of the investigation, it was understood that only a portion of the targeted assets would be confiscated. Because half a century has passed since Korea celebrated its independence, almost all the profiteers of imperialism have passed away.

“With the majority of pro-Japanese collaborators being deceased and therefore unpunishable, the state decided on a truth-based approach in its investigation behind pro-Japanese collaboration, rather than pursuing criminal punishment. The only punishment will be confiscation of property acquired by collaboration with Japanese imperialists,” said the commission’s chairman, Kim Chang-kuk, in his final report.

The commission looked into assets acquired by people from 1904 to 1945 through collaboration with the Japanese.

“The investigation process looked at a very, very limited number of assets, but the fact that the government actually had a hand in the issue and imposed some kind of punishment is of historical significance,” said Cho.

For instance, according to a white paper released by the investigative commission, Lee Wan-yong, a major pro-Japanese collaborator, tripled his assets by 1925 to what would be equivalent to 60 billion won ($51.2 million) in today’s currency. He mainly expanded his assets by borrowing nationally-owned land for free and either lent or sold it off to third parties. The white paper included information that he abused his power and received bribes.

Lee and his family sold their tangible assets so they could avoid scrutiny. Lee dumped 98 percent of his real estate assets to Japanese land owners from 1915 to 1917, so the land his decedents currently possess is very little compared to what he once had.

How did the recent drive to repossess assets begin?

Ironically, the establishment of the commission was triggered by pro-Japanese collaborators’ descendants.


The Korean government held the Ancestral Property Recovery Program to find owners of abandoned land in order to spur development. It seemed there was a lot of land around the country that did not have an owner.

The program started in municipal areas in 1995 and soon spread nationwide in 2000. Descendants were allowed to claim property they had not known about if they reported to local government offices and went through a search based on their family information.

But here a predictable problem arose. Since people all over the nation tried to acquire rights to land that might have been their ancestor’s, lawsuit against the central and local governments started piling up. Lawsuits were even filed against people who might be in possession of their land. It was a field day for lawyers.

Among those fighting over the ownership of land were descendants of pro-Japan collaborators. They asserted that they had a right to lost property, which they had only recently been made aware of, and demanded compensation.

Some descendents of pro-Japan collaborators showed no scruples.

Instead of keeping quiet for fear of backlash, descendants of Lee Wan-yong, Song Byeong-jun and Lee Ji-yong, all infamous pro-Japanese collaborators, even made land claims.

As the news spread through the country that descendants of three of the biggest “traitors” in the nation’s history were seeking compensation for lost land, the question quickly arose whether or not they should have the same rights to lost property as others, since it was believed the method of acquisition was considered unethical and even immoral.

According to the Judiciary Committee of the National Assembly in December 2004, 31 cases were filed by descendents of pro-Japanese collaborators for the return of land formerly owned by their ancestors. Among those cases, the descendents of Lee Wan-yong filed the most, at 17 requests.

The real trouble began after Lee’s descendants won their lawsuit.

After being awarded the ownership deed for 2,372 square meters of land in Bukahyeon-dong, central Seoul, the public was outraged. The source of the ire: It was viewed that descendants of traitors were being rewarded for betraying their nation and helping the Japanese during the occupation. The land was worth 3 billion won in 1992.

And that was just the beginning.

Rallies were organized to prevent descendants of Song Byeong-jun from reclaiming their rights to property in Bupyeong, Incheon, which has been used as a U.S. military base at the time. It had an appraised value of 300 billion won in the early 1990s.

Civil organizations such as “Citizen’s Participation Network, the People’s Power,” formed a civil movement to disqualify the descendants of pro-Japan collaborators from reclaiming their ancestors’ land.

“This process should have been completed a lot earlier. And I think the descendants should not appeal for justice, but have some time for self-reflection instead,” said Cho.

The reason Korea is going through this pain only now, 60 years after the fact, is that the country did not deal with the Japanese annexation period adequately after independence was gained.

“After independence is achieved, normally the failed power structure is punished and re-educated, and a select few may be hired back to work for the nation again,” said Cho. “France, Germany, Indonesia, Burma, Vietnam, China and even North Korea imposed appropriate penalties on the previous government leaders and officials before they set up the current government.”

There had been a small effort to clean the air after independence from Japan. The Special Committee for the Prosecution of Anti-National Offenders was established, but it did not last long because of pressure from sources who had pushed South Korea to put economic growth as its first priority.

Contrast that with the North Korean regime that executed almost all pro-Japanese collaborators.

“If the Special Committee for the Prosecution of Anti-National Offenders had been successful in its activities, the pro-Japanese collaborators would have been punished by criminal law, their property confiscated and their civil rights suspended,” said Kim Chang-kuk.

Korea chose to pursue economic growth over justice, in part because it was surmised that a North Korean style purge would leave the South without its economic, political and social movers and shakers. It would also prolong the pain of colonization.

As the world entered the Cold War era after World War II, there was pressure from the United States to pursue an economy-focused rebuilding. It basically bolstered the rehiring of pro-Japanese collaborators in the political, economic and cultural fields, as they had pulled the levers of society for half a generation before the Korean War.

Ever since, there has been animosity among the general public.

“Korea can be considered as the only country in the world where the officials that once collaborated with imperialism got back into the governing body - even after the new government has established,” added Cho.

The Investigative Commission on Pro-Japanese Collaborators’ Property is viewed as a first step to a national housecleaning of sorts. And there is a drive to continue the momentum.

Even though civic groups got the ball rolling for the government commission, they have reached their limit. If further progress is to be made, Cho says more resources will be needed to sort through, read and organize old land documents. He says many people will be needed to handle the hundreds of thousands of cases, and civic organizations do not have the personnel or financial resources to do it alone.

“It took 18 years just to publish the ‘people dictionary’ of pro-Japanese collaborators, so following details about every financial path and background will be much more difficult and complicated,” said Cho.

Now the government is deciding what to do with the 9,645 square meters of repossessed land.

The Commission announced that all the property they acquired will be used to commemorate “men of merit.” But how exactly the assets will be divvied up is still being discussed. It will be under the purview of the Ministry of Patriots and Veterans Affairs.

Another problem that has arisen is that the term “men of merit” does not differentiate patriots from veterans. A drive is under way to allocate some or all of the repossessed assets to commemorate the sacrifices of patriots who fought for Korea’s independence from the Japanese.