Audit board to focus on how gov’t hires people

Audit board to focus on how gov’t hires people 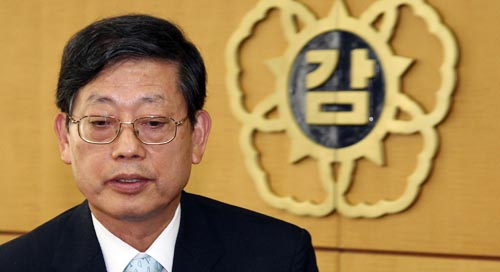 Kim Hwang-sik, chairman of the Board of Audit and Inspection, talks with reporters yesterday. [YONHAP]


The Board of Audit and Inspection starting this week will turn its attention to how public servants are hired, the chairman said yesterday, following a nepotism scandal that cost the foreign minister his job over the weekend.

“Public servants should take on the role of lighthouses with high ethics and fairness, now more than ever,” Kim Hwang-sik, BAI chairman, said in a speech to mark the second anniversary of his taking office, which falls on Wednesday.

“We are open to tolerating mistakes that may be made during active administrative procedures, but we will sternly reprimand public servants who have been idle or engaged in illegal acts,” he said.

Kim promised that a special review of hiring and recruiting of public servants would be carried out through the latter half of this year and would not be restricted to major government ministries, like the Foreign Ministry, but will go down to the local government level. This will be the bureau’s first focus on hiring and recruiting.

The investigation jibes with President Lee Myung-bak’s recent promise of a “fair society” in the final years of his term, and comes after Foreign Minister Yu Myung-hwan was forced to resign after a public outcry over his daughter being selected over other candidates for a job at his ministry.

“The president was speaking in theory; I don’t think he had specific changes for the government in mind,” Kim said. “He means to run the government according to laws and regulations, and the board has until now kept its principles on boosting national welfare through upright laws and regulations. I believe our principles in essence are the practical measures to creating a fair society.”

Kim said his idea of a fair society is one that “gives everyone a fair chance for free competition according to laws and rules. And it should be one where the country and society are considerate to those who are unable to compete.”

When asked about Prime Minister-designate Kim Tae-ho stepping down after confirmation hearings raised questions about his ethics, Kim said, “There’s an understanding now among the people that a public servant should be a person who has a career and experiences that everyone can accept.”

Asked about rumors that he will be nominated as prime minister, Kim replied, “I just know I’m one of those being mentioned by the media. I think that my job right now is to do my task as chairman of the BAI well.”