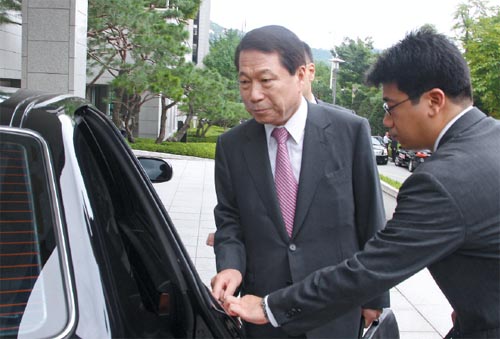 
The government confirmed yesterday that nepotism allegations that forced the resignation of Foreign Minister Yu Myung-hwan, the longest-serving cabinet member in the Lee Myung-bak administration, were true.

The Ministry of Public Administration and Security announced the result of an investigation into the scandal and said, “The Foreign Ministry knew Yu’s daughter would apply for a special recruitment exam in advance and violated the related laws to hire her.”

According to the Public Administration Ministry, Yu Hyun-sun, 35, was given an almost perfect score during a final job interview at the ministry by two judges, both officials of the Ministry of Foreign Affairs and Trade, including senior personnel manager Han Chung-hi, last month. But the Public Administration Ministry said that three other judges, all outsiders, gave her scores lower than another applicant.

The special recruitment was open to experts in free trade agreements. Six people applied for the mid-level, fifth-grade position and Yu was chosen over the other five on Aug. 31.

The Public Administration Ministry said Han and the second ministry official stressed Yu’s work experience during a meeting among the judges and persuaded them to give her more points than they initially planned. Yu Hyun-sun worked for around two years as a contract worker at the Foreign Ministry from June 2006.

The process of selecting judges was also unusual.

Usually, the head of a department that needs a new employee selects judges. In Yu’s application, Han selected the judges and was one himself.

The Foreign Ministry also manipulated the job requirements to tailor them to Yu’s qualifications.

The vacancy was for an expert in international legal disputes on FTA issues, but the ministry excluded a law degree as a mandatory requirement and added a clause saying it wanted “a person with a master’s degree and at least two years of experience in the relevant fields.”

The ministry did not accept TOEFL test results, unlike in previous recruitments, and only accepted the TEPS test, which may have disadvantaged other applicants. Yu Hyun-sun has a master’s degree and a TEPS test result.

The announcement dealt a blow to the Foreign Ministry, which initially defended itself by saying strict screening was done for every employee.

“We accept humbly the conclusion of the audit by the Ministry of Public Administration and Security that there was a fairness issue in the special recruitment process, and we apologize to the public about it,” Foreign Ministry spokesman Kim Young-sun told reporters.

Shin Kak-soo, first vice foreign minister who is serving as acting foreign minister, told his staff that the credibility of the ministry is at stake. “Let’s do our best to overcome the situation so that the Foreign Ministry will be able to have a new opportunity,” Shin said.

The scandal hampered the government’s bid to reform the recruitment system for mid-level, fifth-grade civil servants, including junior diplomats.

Ahn Sang-soo, chairman of the ruling Grand National Party, said at a party meeting yesterday that the government’s plan to fill up to 50 percent of new mid-level public servants with experts from the private sector by 2015 should be eased to 30 percent or 40 percent.

The government’s reform plan, announced last month by the Ministry of Public Administration and Security, was in response to criticism that the current recruitment system has produced many uncreative and “nerdy” officials or diplomats. Public Administration Minister Maeng Hyung-kyu, however, rejected the GNP call, saying the 50 percent goal is not that large. Among mid-ranking government officials hired over the past 10 years, 37.4 percent were hired from the private sector, he said.