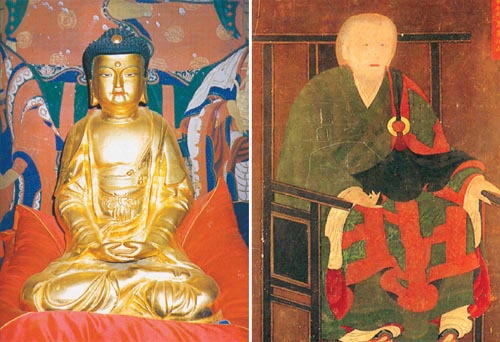 A metal statue of the Buddha in Baekryeon Temple, Ganghwa, Gyeonggi, left, was stolen in December 1998. Right, a lost portrait of a high priest in Songgwang Temple, Suncheon, South Jeolla. Provided by the National Police Agency


The National Police Agency alerted Interpol to the theft of stolen national treasures and cultural assets in hopes of getting them back, including Sowonhwagaecheop, a silk scroll with a poem by Prince Anpyeong, the third son of King Sejong the Great.

According to police, they have provided Interpol with information about ten missing national treasures and 19 local cultural properties, including their pictures, descriptions of features, the names of owners and when and where they were stolen.

Police said Sowonhwagaecheop, national treasure No. 238, was stolen from its owner’s house in Jegi-dong, Dongdaemun District, in 2001. Historians said the scroll is only one of two that shows the famous calligraphy of Prince Anpyeong. The other piece, an epilogue for Mongyudowondo, a famous painting by Ahn Gyeon, is in Japan.

Korea’s move follows the success of the Indian police in tracking down a valuable Hindu sculpture through Interpol, police said. Interpol found the sculpture at an auction in New York in April and confiscated it at a British airport.

Police suspect that Korea’s national treasures might have been smuggled to Europe or Japan.

“We have made a special link called ‘Works of art stolen in Korea’ on Interpol’s web site,” police said. “Through the international police system, we will be able to rely on the collaboration of 188 member countries and hopefully attract reports from civilians.”