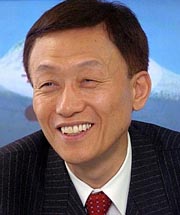 The JoongAng Media Network (JMnet) yesterday appointed Nam Sun-hyun, 63, president of KBS Media, as a president to lead its advance into the broadcasting business. JMnet is Korea’s most prominent multimedia group, operating a range of services that include the JoongAng Ilbo, the JoongAng Daily, broadcasting, online services, weeklies and magazines, with a total of 26 media outlets.

Nam started out as a journalist at Tongyang Broadcasting Corporation in 1974. He is known as an expert in global strategies in the media industry.

At KBS news, Nam was the Washington and New York correspondent and head of the KBS Global Center.

Nam is a seasoned journalist who has covered various aspects of Korea’s society and economy. He was also awarded the grand prize at the 13th Korean Broadcasting Awards for his documentary “Challenge for the Nobel Prize.”