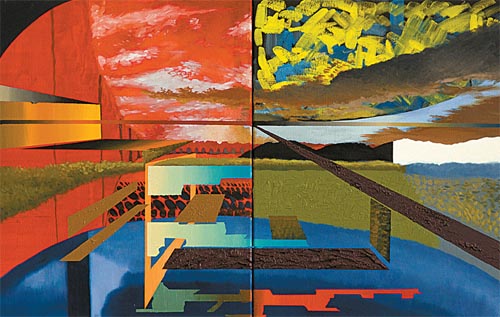 ‘21C Utopia’ by David Chang Provided by the artist

The 25-year-old’s solo exhibition, “Color in Memory,” is being exhibited this week at Blank Space in New York.

The show, which runs until Saturday, features Chang’s abstract and semi-abstract paintings tinged with strong colors.

Chang thinks of color as “spirit,” similar to Fauvist painters like Henri Matisse - who used color not just as object but to express emotion.

Color is employed to great effect in his work “21C Utopia,” which captures his memories of his trip to Naoshima, Japan. Chang was “so impressed with their architectural expressions and overall layout of the island that he felt he was in a 21st century fantasy world, having just escaped from the secular world,” according to a gallery press release about the exhibit.

His use of color in this and other works also reflects the Eastern side of his upbringing. Chang mainly uses five colors: red, yellow, blue, white and black, just as ancient Buddhist artists did to express the universe.