Sarah Chang is back

Sarah Chang is back 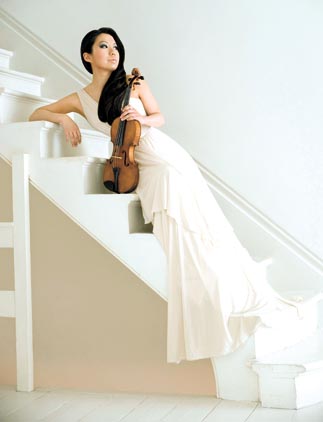 World-renowned violinist Sarah Chang is set to hit the stage in Seoul next weekend, nine months after her first solo recital here in a decade.

The prominent Korean American soloist will play with the London Philharmonic Orchestra. She will perform her favorite Brahms piece, Violin Concerto in D Major, Op. 77, as well as Dvorak’s Symphony No. 8 in G Major, Op. 88.

The Brahms violin concerto is part of her latest critically-acclaimed album from EMI, which was released in November last year in celebration of the 20th anniversary of her debut. On the album, the 29-year-old virtuoso plays the piece with the Dresden Philharmonic Orchestra under the baton of the legendary German maestro Kurt Masur.

In the minds of most Koreans, the Philadelphia-born Chang is remembered as a cute and prodigious child who made a name for herself around the world as a Korean. Since the release of her debut album when she was 9, she has recorded and performed with a number of prestigious musicians and orchestras. The late American violinist and conductor Yehudi Menuhin once said that Chang is “the most wonderful, the most perfect, the most ideal violinist I have ever heard.”

Last Friday, the JoongAng Daily talked to Chang in a telephone interview two weeks ahead of her upcoming performances in Seoul. Chang was in Los Angeles in the midst of her current tour.

During the interview, she talked about her career, her roots and her hobbies.


Q. What do you like the most about Brahms’ Violin Concerto?

A. [It’s] one of my favorite concertos. It’s incredibly dramatic, passionate and it’s one of those pieces that has so much love in it that every time I perform it I feel so humbled by the piece - I just have so much respect for the composer. It’s a piece I learned when I was 8 years old but already at that age I was in so awe that I put it away. I just didn’t play it at all until I became 18 years old. I didn’t feel I was ready enough to perform it.

Do you get excited about performing in Korea?

I do, because my family is there. The Korean public is so warm and enthusiastic. It feels as if I’m playing for my family. I am overwhelmed by their warmth and they welcome me like I am their daughter. It’s such an amazing feeling when you are on stage. I never actually lived in Korea but I do still feel very strongly it’s where my roots are.

Now that you are approaching 30, and have sustained a successful career as a musician, would you say you have grown out of the “prodigy” label to some degree?

I feel that I have. That prodigy label wasn’t really a big deal for me because I never regarded myself as a prodigy. I never thought what I did was anything out of the ordinary. I was doing what I loved and was good at it. That label was probably something more the media put on me, and the recording companies, as ways to market me. It’s okay if you are nine but it’s not okay when you are 29. I sort of feel like I have been trying to prove myself as a musician on stage without any sort of label attached to my name because I am here for the long run. I am grateful that the musicians I’ve worked with never made an issue out of my age.

You’ve been playing the violin for 20 years and may continue to do so for the rest of your life. But do you have other aspirations beyond music?

Not really. Had I not been a violinist, I think I would have loved music enough that I would have wanted to have been in the music industry somehow, whether that would have been the recording or promoting industry. I don’t think there is anything as exhilarating and wonderful as being on stage. I feel very, very lucky that I can do this.

What are you listening to these days?

I listen to a lot of pop - Lady Gaga, Beyonce, Rihanna, Kings of Leon. I listen to classical when it’s work but when I’m relaxing I listen to pop.

I’m very new to it. A year or two ago my management came to me and said, “Sarah, you don’t do anything. You don’t use MySpace, Facebook or Twitter. You gotta do something.” So I started Twittering because I could do it on my own time. When I’m at the airport and have a three-hour delay, then I’m going to be Twittering and stressing out.

Based on your Twitter messages, you seem to enjoy traveling.

You appeared in “Mureuppak Dosa,” a nighttime talk show on MBC three years ago, and that episode was immensely popular. The public’s perception of you seems to have changed a lot since then. Did your appearance on the show bring about any changes in your life?

Not my life, really, but I think it introduced me and classical music to a much broader audience - people of all ages. I’ve been doing my career for such a long time that anybody in classical music or anybody who has an interest in the field already knew who I am. My cousin’s friends in elementary school came to me and said they didn’t know what violin was until they saw me on the show. I remember when I was in London and the [Korean] ambassador was talking about me in the show. That was one of the most wonderful things about the show.

*Tickets are sold out for the London Philharmonic Orchestra concert with Vassily Sinaisky featuring Sarah Chang on Sept. 15 & 17 at 8 p.m. at Seoul Arts Center. Call 1577-5266 or visit www.sac.org for information.